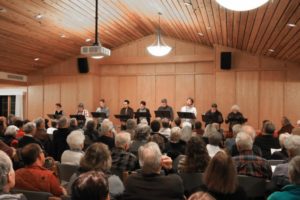 Peninsula Players Theatre presented a reading of Kristine Thatcher’s “Apparitions” on Monday, February 4 to a capacity crowd at Björklunden. Thatcher was commissioned by the Peninsula Players in the mid-1990s to write a play using Door County’s history and unique character as its major influence.

“Apparitions” was produced as part of The Play’s the Thing, a winter series of play readings organized by Peninsula Players Theatre and with support from and in coordination with Door County Reads and its exploration of “The Death and Life of the Great Lakes” by Dan Egan and “Wintering” by Peter Geye.

The play reading set an attendance record for The Play’s the Thing. “It was very exhilarating to see so many members of the community who braved the weather to join us,” said Brian Kelsey, Peninsula Players managing director. “Tonight’s audience of more than 160 is the largest we’ve hosted.”

The cast was under the direction of Greg Vinkler, the Peninsula Players’ artistic director.

The Play’s the Thing is funded in part by a grant from the Wisconsin Arts Board with funds from the State of Wisconsin, as well as generous grants from Door County Medical Center and Friends of Door County Libraries and operating funds from Peninsula Players Theatre.

The 2019 The Play’s the Thing series also includes “Tales of Men and Ghosts” adapted by Steve Pickering from stories by Edith Wharton, which will be performed Monday, March 4 and “Love, the Cracksman,” a new fast-paced comedy by Mark Brown on Monday, April 1. Both will begin at 7 p.m. at Björklunden. Seating is limited.