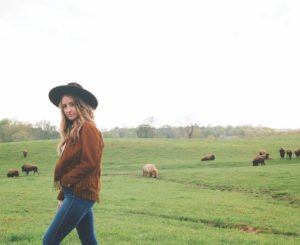 On Friday, June 15, at 8 p.m., Margo Price—a fast-rising star in the world of American songwriters—will take the stage at Door Community Auditorium (DCA) in Fish Creek.

Margo Price pawned her wedding ring to record her first solo album, “Midwest Farmer’s Daughter,” which NPR called “the hard-won arrival of an artist who feels like she’s always been here.” Her rise since then has been meteoric. She has graced “best of” lists in publications nationwide and shared stages with the likes of Willie Nelson, Bob Dylan, and Emmylou Harris. In fact, Nelson has called Margo Price “an amazing talent.”

On her recent release “All American Made,” Price continues to tell her compelling story—the loss of her family’s farm, a brush with the law, the death of her child. Delivering on the promise of her debut and then some, this record proves that Margo Price is a songwriter who’s here for the long haul.

Rolling Stone named “All American Made” one of the top 50 albums of 2017, writing, “Margo Price’s 2016 debut, “Midwest Farmer’s Daughter,” established her as one of the sharpest songwriters in Nashville, but her second LP upped the ante in remarkable fashion…. No other country act, and precious few from any genre, went nearly as deep as Price did this year.”

Margo Price’s performance is made possible with support from major sponsors Blacksmith Inn on the Shore, Tapuat Kombucha, and The Kitschinn Juicery, as well as supporting sponsors Nathan Nichols & Company and Wild Tomato.