You are here: Home / Door County Newswire / Big Mouth and The Power Tool Horns Swing into the Holidays at DCA with Special Guests 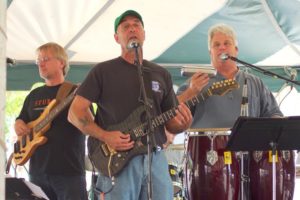 On Saturday, November 25, Door Community Auditorium will get into the holiday spirit with a triple-bill of festive performers, as Big Mouth and the Power Tool Horns swing into the holidays with special guests Janet Planet and Steve March-Tormé.

Big Mouth, one of Door County’s most popular bands, is known throughout Wisconsin for playing an eclectic and dance-worthy mix of blues, jazz, and rock music. Almost forty years after the band was founded in Michigan by guitarist Jay Whitney, Big Mouth is still going strong, now featuring a horn section, The Power Tool Horns. At DCA, Big Mouth will present an evening of holiday music and other swinging tunes.

Big Mouth and the Power Tool Horns will be joined at DCA by two special guests. Janet Planet is an internationally touring jazz vocalist whom Jazziz Magazine calls “the voice of the New Jazz Culture … amazingly powerful, with seemingly limitless expression.” As a singer and a performer, Janet Planet is spirited and vivacious. New York Magazine calls her a “sultry vocalist with a vast repertoire of jazz, blues, and standards…with some Bob Dylan thrown in for good measure.”

Filling out the triple-bill will be Steve March-Tormé, whose singing the L.A. Times calls “seductive and effortless.” March-Tormé’s extraordinary voice has electrified audiences in venues from the Detroit, MI, to Palm Desert, CA, and worldwide in London, Japan, Australia, Brazil, and Canada. Born in New York City to acclaimed crooner Mel Tormé, Steve March-Tormé has spent a lifetime in music. The New York Daily News writes, “Second-generation talent can be hit-or-miss. You can hit yourself if you miss this one…the guy is so personable, his voice so becoming and his performance so filled with élan, that he is always interesting.”

The November 25 performance is made possible with support from major sponsor Main Street Market.