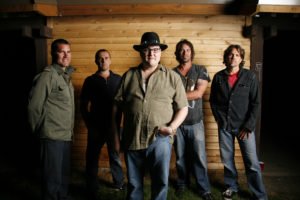 Blues Traveler is one of America’s most popular live bands, having built a dedicated fan base with their boundless energy, improvisational live shows, and tireless touring. The band’s breakthrough, multi-platinum selling album “four” (featuring hit singles “Run-Around” and “Hook”) earned them a Grammy for Best Rock Performance. Since Blues Traveler formed in 1987, they have released 20 full-length albums.

The Star Tribune calls Blues Traveler “smoldering…confident and at ease.”

Blues Traveler’s most recent album, “Blow Up the Moon,” is a collaborative effort featuring a range of artists from across the musical spectrum, representing country, pop, reggae, and hip-hop. As one of the most successful representatives of the jam band movement, Blues Traveler continues to chart new musical directions. In October, they will release “Hurry Up & Hang Around,” a twelve-track opus that finds the band re-energized and laser-focused,  stirring up an intoxicating brew of rowdy rock, smoky psychedelica, southern folk, staggering soul, and brash blues.