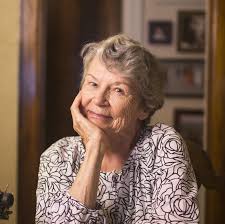 Award-winning novelist Faith Sullivan visits Door County to give a sneak preview of her ninth novel, Ruby and Roland, scheduled to be published by the non-profit literary press Milkweed Editions in fall of 2019. Write On, Door County will present a coffee and conversation with Sullivan on Tuesday, July 24, 10 am , at the Donald and Carol Kress Pavilion in Egg Harbor. The event is free and open to the public. Light refreshments will be served.

Thursday, July 25 at 5:30 pm, Write On partners with The Reader’s Loft in Green Bay to present another opportunity to hear Sullivan discuss her novels and creative process. The event is free and open to the public.

Hailed as the William Faulkner for the Upper Midwest, Sullivan’s novels chronicle the lives of the residents of Harvester, a fictional town in southern Minnesota. Six of her eight novels are set in Harvester. Her latest, Good Night, Mr. Wodehouse, was named by the Wall Street Journal as one of the best fiction books of 2015. It spans 68 years, the entire life of Nell Stillman, the book-loving widow who briefly appeared in The Cape Ann, the first of the Harvester novels.

Through her novels, Sullivan has created a portrait of the lives of the people who lived in small towns of the Upper Midwest in the mid-part of the 20th century. The novels are companions to one another, not sequels, with minor characters in one novel becoming central characters in another. In her early 80s, Sullivan says she has at least two more Harvester novels kicking around in her head.

For more information about the events, visit www.writeondoorcounty.org.

Write On, Door County is a 501(c)(3) nonprofit organization. Write On conducts programs to inspire people to write and share their stories at various venues throughout Door County.