You are here: Home / Door County Newswire / “Carpool to Heaven Tour” Concert at Base Camp 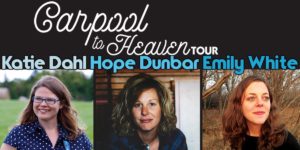 Popular Door County musician Katie Dahl will join singer-songwriters Emily White (Chicago) and Hope Dunbar (Utica, NE) for a concert in the space above Base Camp Coffee Shop in Sister Bay on Monday, May 13 at 7 p.m. Their performance at Base Camp will be the fourth stop on the “Carpool to Heaven Tour,” a ten-day tour across the Midwest. Base Camp is located at 10904 Highway 42. Tickets cost $20 and can be purchased at katiedahlmusic.com or (pending availability) at the door. Bakery, coffee, beer, and wine will be available for purchase.

Katie Dahl, Emily White, and Hope Dunbar are Midwestern songwriters with loyal fan bases and multiple accolades to their collective credit. Though they normally perform individually, at Base Camp they will share their songs in an intimate “in-the-round” format, commenting on and adding texture to one another’s work. Dahl, White, and Dunbar are firmly rooted in the folk tradition, with songs that roam freely to explore country, jazz, and rock traditions.

Local singer-songwriter Katie Dahl, says the Milwaukee Journal-Sentinel, “combines old-fashioned populism, an abiding love of the land and wickedly smart love songs, all delivered in a rich and expressive alto.” Known for the literate candor of her songs and the easy humor of her live performances, Dahl also has four studio albums and an original musical play, Victory Farm, to her credit. Wisconsin Public Radio calls Dahl “the real deal.”

Indie folk-rock touring singer/songwriter Emily White, based in Chicago, has been described as standing out “conspicuously from the pack…with her hushed, preternaturally haunting vocal delivery and bewitching sense of indie-rock-informed melody.” The Memphis native has released four albums to date, and while she’s based out of Chicago, she travels regularly throughout the U.S., captivating crowds with her unique voice, favorite Martin guitar, Southern roots, and Midwestern charm.

Nebraska-based songwriter Hope Dunbar is fresh off the release of her album “Three Black Crows,” which is receiving critical acclaim and radio play across the country. Houston Music Review writes, “Hailing from Utica, NE, Hope sings loud and proud about real human issues and real light hearted fun. She dispels any claim that intelligence and creativity are unique to large urban centers.”

Seating for the concert is limited and first-come, first-served. Refreshments and beverages will be available for purchase. For more information, visit www.katiedahlmusic.comor call Base Camp at (920) 854-7894.