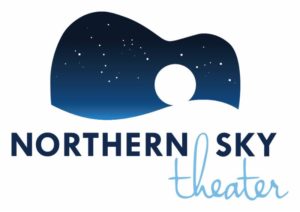 Corrie Beula Kovacs was last seen on the Northern Sky 2014 fall stage as the female lead in The Bachelors. Beula Kovacs will originate the role of Dottie Knowles in the world premiere of We Like It Where?, which she also co-wrote with husband Steve Kovacs. In addition, she will appear in Dairy Heirs, filling the role of Elsie.

Back for his fifth year, Alex Campea will head up the Winneconne News in We Like It Where? as C.O. Rogers, and will reprise the role of JT Blatschke in Dairy Heirs.

Last year’s Boxcar hobo and Dairy Heirs Hollywood writer, Doug Clemons, will return to his role of Gabe in Dairy Heirs while also offering his take on the role of Captain Jackie in Windjammers.

Lachrisa Grandberry made her Northern Sky debut to rave reviews in Dairy Heirsin 2018. She returns this summer to take on the full slate of musicals – on stage six nights a week – reprising her role in Dairy Heirs as well as playing Vera Kitchen in We Like It Where? and Millicent in Windjammers.

Long time company members Fred Heide and Jeff Herbst will be sharing the role of William Schlapman in We Like It Where? and will alternate performances. “Doc and I both wanted to perform this season, but I also wanted to maximize use of other actors. That left us short on roles for the two of us,” stated Herbst, also the company’s Artistic Director. “We haven’t figured out the particulars, but I can imagine that we’ll do a certain amount of tag-teaming during rehearsal. I think it will be quite fun.”

Beloved actor, Doug Mancheski, will be back for his 23rd year under the stars. This year he will portray Governor Knowles in We Like It Where? and a drunken sailor in Windjammers. “Crusty old Fred, the first mate, who’s been passed on for Captain by a younger fellow, tries to assert himself by claiming the old way is the best way,” Mancheski says of his character. “He also resents the boy who is educated and can read, unlike Fred. It’s this clash of the old versus the new. I enjoyed originating this role in 2013.”

Molly Rhode once again will wear multiple hats this summer as Associate Artistic Director, and director of We Like It Where? She will also return to her role of Linda in Dairy Heirs.

Audiences may recognize Isaiah Spetz from the 2017 performance of Victory Farm where he played the young German POW, Karl. In We Like It Where? he will have the unique opportunity to portray two different characters in one show.

It’s lucky season 13 for Chase Stoeger with Northern Sky this year. Along with reprising his “twinning” role in Dairy Heirs, Stoeger is also reprising one of his favorite roles as Nathaniel (Nate) in Windjammers. Stoeger and his wife, Rhode, also crochet hats as souvenirs and produce fun social media marketing videos for the company.

Back after a year’s absence, Bill Theisen will join the cast of We Like It Where? as the 1967 Winneconne Village President, James Coughlin. In 2017, he was in the casts of Oklahoma in Wisconsin and Doctor! Doctor! but audiences may remember him more from his bra-wearing portrayal of Harvey Keister in Northern Sky’s 2014 production of Packer Fans From Outer Space.

New to the Northern Sky stage will be local Gibraltar high school student, Hayden Hoffman, playing the role of Boyo in Windjammers. Joining him will be four new interns, Emily Brandt, Mari Duckler, Mikayla Locke, and Jamie Mercado. Brandt and Mercado will portray Jan and Kay in We Like It Where? Duckler, Locke and Mercado will appear in Windjammers in the roles of Edwina, Tilly and Nancy.

Summer general admission tickets are $22 for adults, $11 for students, and $7 for children 12 and under. Reserved seats are $8 more per ticket. There is no park sticker required to attend performances in the State Park.

Tickets are available online at www.NorthernSkyTheater.com and at the Northern Sky box office at the Green Gables shops in north Ephraim or via phone at (920) 854-6117. Office hours are 10am to 4pm Monday through Friday.