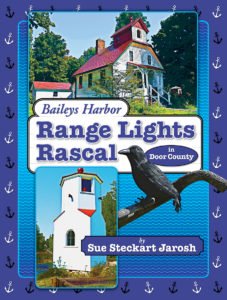 Sue Steckart Jarosh grew up in DePere and Door County where she spent many summer days at the family cottage on Cave Point Road in Jacksonport. She attended St. Norbert College and graduated in 1967 with a degree in Elementary Education and began teaching first grade at Huntley School in Appleton, WI.  There she met and married her husband, Joe Jarosh. Door County has always been a special place and in 1984 she and Joe purchased the old Bagnall Home on Hwy 57 in Jacksonport where they opened on August 1, 1984, as Jacksonport Craft Cottage Gifts. They operated the shop successfully for 31 years and sold it in the fall of 2015.

Sue retired as a shop owner and now had more time for her interest in writing. She and Joe had written the Jacksonport Column for the Door County Advocate for 20 years. She read many children’s books to her former students and more recently to her grandchildren.

On retiring from her shop Sue decided to accept a position as a tour guide at Eagle Bluff Lighthouse Museum in Peninsula State Park in 2016. Sue’s first book, Door County’s Eagle Bluff “Lighthouse Mouse” was inspired by her work at the lighthouse and by her grandchildren and was published in 2017. With that success she decided to continue with a series on Door County lighthouses.

Built in 1869,  and added to the National Register of Historic Places in 1989, the Upper Range Light and its companion Lower Range Light in Baileys Harbor, are the only lighthouses of this style that are still on range and functional as navigational aids. At the time they were built, the Range Lights were considered a more effective way to keep ships off the treacherous reefs and shallows at the entrance to Baileys Harbor. These modest but enduring structures played a critical role in the history of Baileys Harbor and in the founding of The Ridges Sanctuary. Today, The Ridges staff, members and volunteers have become the new keepers of the lights. They are dedicated to the preservation of the unique structures and their cultural history.

Sue has worked as a volunteer at the Range Lights in Baileys Harbor. She and her family enjoy The Ridges and Upper and Lower Range Lights and knew there was a story to share. After research into lighthouse families at the Range Lights, Sue chose to feature the Larson Family – George, Gertrude and their two sons, Charles and Willie. The Larson family resided in the Upper Range Light from 1882 –1888. Her goal in writing this book is to share the history of this special place and to help raise more awareness about the history and families who lived there. This second book in her lighthouse series, “Baileys Harbor Range Lights Rascal,” has recently been released.

Sue Jarosh will be signing her new book, “Baileys Harbor Range Lights Rascal,” at Edgewood Orchard Galleries on Saturday, May 5, from 10 a.m. to 3 p.m. during their opening day celebration. She will be happy to personally sign copies for you. The book will be available at Edgewood Orchard Galleries throughout the season and at many other local gift shops throughout Door County.