In a lively press conference followed by a reception at Door County Maritime Museum on January 16, 2019, the Door County community was officially introduced to The Griffon String Quartet, a full-time, resident quartet made up of four of the finest young professional musicians in the country. The four string players, each with advanced degrees and performances around the world to their credit, includes Ryan Louie (cello), Blakeley Menghini (viola), Roy Meyer (violin), and Vinicis Sant’Ana (violin).

The new Quartet is the result of a coordinated effort by Midsummer’s Music in Door County, the Fine Arts Institute at East High School in Green Bay, and St. Norbert College in De Pere to enhance student academic achievement through increased exposure to music. The resulting three-year program will embed a professional resident string quartet ensemble into school classrooms throughout Door and Brown counties.

Ryan Louie of Queens, New York began playing the cello at age 10. The sought-after chamber musician, orchestral player and music educator has performed in England, Germany, Holland, Italy, Japan, Korea, Switzerland, and Taiwan. He has advanced degrees from Carnegie Mellon University and the Cleveland Institute of Art. Louie has garnered an extensive list of awards andhas participated in numerous festivals and orchestras.

Blakeley Menghini grew up two hours west of Chicago in “the corn fields,” she says, before heading to the University of Wisconsin-Madison’s Mead Witter School of Music where she earned her Doctor of Musical Arts. Menghini has participated in several notable music festivals, as well as taught a Music Appreciations curriculum and served as an orchestra director.

Roy Meyer began violin studies at age 4 in Stevens Point, Wisconsin. He received his Bachelor of Music in Violin Performance from the University of Wisconsin-Madison, his Master of Music from the University of South Florida-Tampa, and a certificate in Advanced String Studies from New York University. Meyer has conducted violin master classes at many festivals and universities, as well as service as Concertmaster with the Illinois Symphony Orchestra. 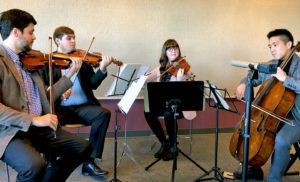 Vinicius (Vini) Sant’Ana grew up in San Palo, Brazil and began playing the violin as a child. He received his Bachelor of Music from the University of North Dakota and his Master of Music from the University of Wisconsi-Madison. Sant’Ana toured China, Japan, the Czech Republic and Brazil with his previous musical groups. He performs regularly with a handful of symphony orchestras, and was Concertmaster of Pao de Acucar Chamber Orchestra, who performed at Carnegie Hall in New York City.

During the press conference, James Berkenstock, Artistic Director, explained the reasoning behind the name of the quartet. Berkenstock noted that Le Griffonwas the first ship to sail in the Upper Great Lakes and was built by the early explorer La Salle in the Lake Erie area. It was hastily launched in 1679 and sailed across Lake Huron and into Lake Michigan and Green Bay. Loaded with furs, Le Griffondeparted Washington Island and Rock Island and disappeared. The mystery of Le Griffonand the loss of its crew of six is yet to be solved. The ship has never been found.

The intrigue and history of Le Griffonstill fascinates many to this day. After exploring several name options for the quartet, the string quartet unanimously agreed to ‘re-launch’ Le Griffon as The Griffon String Quartet. They plan to bring the excitement and mystery of Le Griffonthroughout the communities of Northeast Wisconsin, along with programs aimed at bringing a strong string presence to the area. The Griffon String Quartet, directed by Midsummer’s Music in conjunction with The Fine Arts Institute at East High, Green Bay, and St. Norbert’s College, has begun to teach youth in Door County at the YMCA and the Boys and Girls Club in Green Bay, and has plans for several concerts at service clubs, restaurants, museums, libraries, festivals, churches and senior centers. Their mission is, through performing and teaching, to invigorate the musical culture of the Northeast Wisconsin region.

For more information about The Griffon String Quartet, please contact Allyson Fleck, Assistant Artistic Director, at 920.854.7088 or by visiting www.midsummersmusic.com.