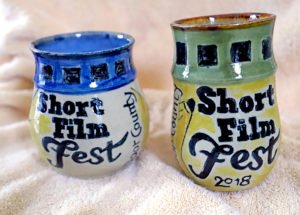 The Sister Bay Advancement Association (SBAA) has announced an expansion of the Door County Short Film Fest to include an encore showing of movies that were first unveiled at the 9th Annual Festival in Sister Bay on February 16-17, 2018. The new event, scheduled for April 21, 1 pm – 8 pm, at The Clearing Folk School in Ellison Bay, will feature 15 short films plus “Through The Windmill,” a feature-length documentary about the history of miniature golf.

The SBAA also announced the winners of two prizes awarded to submitting filmmakers during the recent festival at the Sister Bay Village Hall. The 2018 Juried Golden Mug Award was presented in absentia to a Dutch filmmaker, Niels Bourgonje of Almelo, Overijssel, Netherlands for his humorous 4-minute film “Bridge,” which depicts a friendly stand-off by two automobile drivers who simultaneously arrive on either side of a small country bridge. The 2018 People’s Choice Golden Mug Award was also presented in absentia, to a young California filmmaker, Edina Kishonthy of Culver City, California, for her 17-minute film about a young office worker and aspiring pet painter determined to find a mysterious man who appears in her nightly dreams. Both of the Festival’s award winners received a unique hand-made Golden Mug Award created by Larry “Thor” Thoreson of Gills Rock Pottery in Ellison Bay.

Louise Howson of the Sister Bay Advancement Association, the festival’s hosting organization, said the 9th annual event had its largest attendance ever. “One of the things that’s so gratifying about this event is that it keeps growing each year, and we’ve also found ways to get the local community more involved. This year featured food and drink pop-ups by Stabbur Beer Garden at Al Johnson’s, Island Orchard Cider, McEvoy’s Culinaria and Wild Tomato Wood-Fired Pizza. Like last year, we transformed the Sister Bay Village Hall into a little artistic oasis for watching the festival’s short, innovative films.”

Most of the Festival’s 2018 films will be featured in the upcoming encore showing at The Clearing Folk School on April 21. Doors open at 1 p.m., short film showings begin at 2 p.m., and “Through The Windmill,” a documentary about mini golf that features The Red Putter in Ephraim, and directed by filmmaker Amanda Kulkoski, will be shown at 6:30 p.m. Food and beverages will be available for purchase at The Clearing event — including pizza from La Cocina, craft beers and cider from Island Orchard Cider — plus free popcorn.

Tickets for the April 21 film showings at The Clearing are only $5 each. To reserve a seat in the limited-seating venue, send a confirming email to:  info@doorcountynorth.org

Next year’s Door County Short Film Festival will take place at the Sister Bay Village Hall on the weekend of February 15-16, 2019.