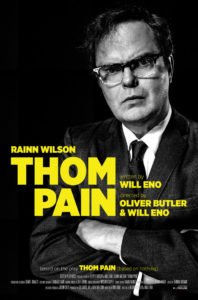 The Door Kinetic Arts Festival (DKAF) has confirmed its lineup up films, including Oscar winners and nominees, Wisconsin-made films, and the Rainn Wilson one-man show “Thom Pain,” to kick off its third annual fest June 11-15 at Björklunden. Wilson will host the screening of “Thom Pain,” a film version of the Pulitzer-winning play he performed at the Geffen Theatre in Los Angeles, Monday, June 11 at 7p.m. and lead a talkback after.

The following night, June 12, will feature short narrative films and short documentaries. The narrative block of films includes the Oscar-nominated comedy, “The Eleven O’Clock,” a new film from 2017 DKAF Award winner Neil Brookshire, a Door Shakespeare and Peninsula Players actor who now makes his home in Door County, and five other short gems.

Documentary short highlights include Oscar winner “Happiness is a Traffic Jam on the 405,” and Oscar nominee “Knife Skills,” as well as four other compelling shorts.

DKAF will also hold a cocktail competition Tuesday, June 5 at the Wickman House in Ellison Bay to select the official cocktail of the 2018 festival. A variety of top Wisconsin bartenders have been invited to submit their recipes (which must include sponsor Death’s Door’s gin) to a panel of judges, including Robert Simonson, who writes about cocktails and bars for a living, primarily for the New York Times; Mike Holmes, the head bartender and co-owner of Wickman House; and Kyle Cherek, the host of the Emmy-nominated NPR show “Wisconsin Foodie.” The winning drink will be publicized throughout the festival and served at local bars and restaurants in Door County.

The cocktail competition grew out of the new cocktail track that DKAF incorporated last year, providing cocktail commentary and free samples each night of the fest. Simonson is also teaching an “Art and the Cocktail” seminar with his brother, DKAF founder Eric Simonson, at Björklunden concurrent with the festival.

DKAF previously announced that Wilson, famous for his portrayal of Dwight Schrute on “The Office,” will be in residence developing a screenplay based on the life of Stetson Kennedy and his mission to bring down the notorious Ku Klux Klan. That screenplay will receive a reading Wednesday June 13, at 8:30 p.m.

Details will be released soon about a writing workshop with Holiday Reinhorn, a noted short story writer and teacher known for her acclaimed book “Big Cats” and her many published stories in literary magazines, who will also hold a book signing at which she and Wilson will read from her work.

Other DKAF events include a night of comedy, music, cocktails and film Thursday June 14, and a reading of a new play and performance of a new dance piece Friday, June 15. Information will continue to updated at www.doorkinetic.com and on DKAF’s Facebook page.

Passes and tickets are available at the door and at www.doorkinetic.com. Festival Passes are $30 and tickets for each night are $10, but the events involving Rainn Wilson (“Thom Pain” on Monday and “Stetson Kennedy” on Wednesday) will require a Pass.

Premium Passes for $50 also gain one admission to a private reception with Wilson, Reinhorn and other DKAF notables at 5 p.m. Wednesday, June 13 at the Kress Pavilion in Egg Harbor. Half price student tickets and passes are available by emailing alan.kopischke@gmail.com.