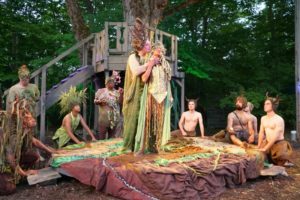 Door Shakespeare opens it 23rd season with two comedies from the bard: Much Ado About Nothing, directed by Joseph Hanreddy, on Thursday, June 28 and The Comedy of Errors, directed by Leda Hofmann on Thursday, July 5 (both at 7:30). Performances take place in the Garden at Björklunden, 1.5 miles south of Baileys Harbor, on Highway 57.

William Shakespeare’s much loved romantic comedy, Much Ado About Nothing, directed by Joseph Hanreddy, begins with a group of soldiers returning home to Door County from the Civil War. The world-weary Benedick and his friend Claudio find themselves reacquainted with Beatrice and Hero. As memories of conflict give way to a life of parties and masked balls, Claudio and Hero fall madly, deeply in love, while Benedick and Beatrice reignite their own altogether different courtship. (Courtesy of Royal Shakespeare Company)

Beatrice and Benedick are played by real-life couple Deborah Staples (Milwaukee Repertory Theatre, American Players Theatre, Chicago Shakespeare Theatre) and David Cecsarini (Next Act Theatre, American Players Theatre, Guthrie Theatre). “This summer we have brought together the best and the brightest actors, designers, directors, and staff from Wisconsin,” says Michael Stebbins, Door Shakespeare’s Artistic Director, “and everyone involved is excited to share the words and the wit of William Shakespeare with audiences young and old alike!”

Door Shakespeare’s companion piece is a rollicking comedy of mistaken identity. In The Comedy of Errors, directed by Leda Hoffmann, two sets of twins are separated at birth. None of them are aware of the other of them. What happens when all arrive in the same town and love is thrown into the mix? Mayhem, of course, but so much more!

Door Shakespeare was created under the umbrella of American Folklore Theater in collaboration with Blue Circle Theatre in 1995. The first season produced in the Garden at Björklunden included A Midsummer Night’s Dream and The Comedie of Errors, which played in conjunction with the same acting company performing across the peninsula at American Folklore Theatre. In 1999, the organization became its own non-profit and has since produced 34 striking productions (including the 2018 offerings) of classical theater by timeless playwrights including William Shakespeare, Oliver Goldsmith, Jean Baptiste Moliere, Edmond Rostand, Richard Brinsley Sheridan, and Oscar Wilde in the Garden of Björklunden’s estate on Lake Michigan in Baileys Harbor.

In early 2018, Amy Ensign and Michael Stebbins were hired as Door Shakespeare’s managing director and producing artistic director. Since that time, Door Shakespeare’s presence in the local and regional community has continued to grow and is enriched by educational programming, including Door Shakespeare’s Summer Theatre Program: Camp Will, as well as Will in the Woods pre-show lectures, Shake-It-Up Saturday pre-show family activities, and Wine Nights. Door Shakespeare’s productions are regularly recognized in year-end top theatre lists, and for many local residents and visitors, Door Shakespeare has become a regular part of their Door County summer experience.

To learn more about Door Shakespeare or to purchase tickets, go to www.doorshakespeare.com, visit the daytime box office at 8093 Highway 57 in downtown Baileys Harbor, or call 920.839.1500.