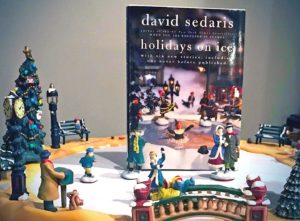 Door Shakespeare wanted to offer an alternative to the public and we thought that sharing some David Sedaris holiday essays from his collection, Holidays on Ice, would accomplish that. I’ve been sharing his writings and producing his plays for eight years, and it was a real eye-opener to see just how many people related to David Sedaris’ pessimistic approach to the holiday season. Young and old and in-between come to these offerings. Many know of David Sedaris because of his contributions to The New Yorker magazine. Others know him from his collections of essays. Others know him because they’ve heard him on NPR every December (since 1992), reading that old chestnut that put him on the map – The Santaland Diaries. Others know him because they have seen the popular stage version of the aforementioned title.

Many people have attended past readings in what I refer to as “holiday attire.” Apparently, when people pull out the holiday ornaments, flame-retardant trees, last year’s candy canes, plastic mistletoe and old fruitcake, they also pull out the box marked “holiday attire.” People go out on the town in their knitted Santa sweaters, their reindeer sweaters, their Christmas tree sweaters, their poinsettia sweaters, or their silver bells sweaters. Then there is the head and face gear: the strap-on antlers, the Rudolph glow-in-the-dark nose, and the “stockings hung-by-the-chimney-with-care” earrings. People have shown me holiday socks, turtlenecks, underwear and bras – yes, bras. I’m sorry I’m not as courageous as them, for it takes a bold person to walk out their front door and subject him- or her- self to ridicule. I’ve seen it all.

I’ll be reading Front Row Center With Thaddeus Bristol, which is one of Sedaris’ tamer pieces. In Front Row Center… theatre critic Thaddeus Bristol reviews The Story of the First Christmas, performed by students at Sacred Heart Elementary under the direction of Sister Mary Elizabeth Bronson. He also takes in A Reindeer’s Gift, by ten-year-old Charles St. Claire, playing at Scottsfield Elementary, and A Christmas Carol, under the direction of eleven-year-old Becky Michaels, at the Jane Snow-Hernandez Middle School. In addition to Front Row Center… I will be sharing two more essays.**

I hope that audiences will be able to walk away from the evening knowing that they are not alone. It’s okay to want to blow a gasket at the commercialism of the holiday season. It’s okay to want to rear-end someone at the Bay Park Mall in Green Bay. It’s not okay, but understandable, if you get an itch to switch price tags on an overpriced chimenea just because you hate saying “chimenea” and because it’s a pain to giftwrap and put under the tree.  My wish, Door Shakespeare’s wish, and I think Mr. Sedaris’ hope is that we’ll continue to find the humor in the holiday and in the every day – in his own unique way.

Come see David Sedaris’ Holidays on Ice on Saturday, December 8 @ 7 p.m. and Sunday, December 9 at 2 p.m., in Vail Hall on the grounds of Björklunden (just south of Baileys Harbor). The readings are free, but donations are welcome. For more information, call 920-839-1500.