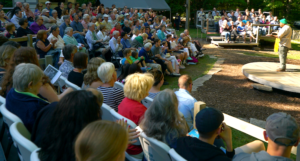 Tickets are now on sale for Door Shakespeare’s 2019 season, featuring “Henry V”and”The Merry Wives of Windsor.” Door Shakespeare is offering special early bird discounts, with savings of up to 35%, through their website (www.doorshakespeare.com), over the phone (920.839.1500), and at their daytime box office in Baileys Harbor (8093 Highway 57).

Door Shakespeare welcomes Milwaukee-based director Matt Daniels to helm their first ever production of “Henry V.” An actor, director, teaching artist, and musician, Mr. Daniels’s acting credits include appearances at most professional stages in Milwaukee, as well as with the Illinois, Notre Dame, North Carolina, and Michigan Shakespeare festivals. Directing credits include productions for First Stage, Milwaukee Chamber Theatre’s New Play Development Series, and several theaters in New York. He is the Director of the First Stage Young Company, in Milwaukee, an award-winning training program for high school actors. Matt is a graduate of the Juilliard School Drama Division.

“Henry V” is Shakespeare’s best-loved history play, full of adventure, intrigue, humor, and romance. The play begins at the English court, where the young king is persuaded by his advisers that he has a claim to the throne of France. We follow Henry’s journey from a goodbye toast at the tavern he frequented in his youth, along trails of the English countryside, and into the battles of Harfleur and Agincourt. “We few, we happy few, we band of brothers. For he today that sheds his blood with me shall be my brother. (King Henry, Act 4 Scene 3)” By the time battles are won and the adventure reaches its end, we see a new Henry, strengthened by his success and humbled by his journey, ready to face his responsibilities as one of the most revered kings in Shakespeare’s cannon.

Door Shakespeare’s companion piece for the 2019 season is comedic gem, “The Merry Wives of Windsor.” Full of pranks, mischief, and Shakespeare’s favorite fool: Sir John Falstaff, “The Merry Wives of Windso” is directed by Marcella Kearns. A Milwaukee-based director, actor, and theatre educator, Kearns serves as associate artistic director of Milwaukee Chamber Theatre and teaches theater at Carthage College, First Stage, and Marquette University. Recent directing credits include “Sherlock Holmes and the Case of the Jersey Lily” at Milwaukee Chamber and “All’s Well That Ends Well” and “Love’s Labour’s Lost” at First Stage.

In “Merry Wives of Windsor,” Queen Elizabeth’s favorite bad boy, Sir John Falstaff, attempts to win the hearts of Mistress Ford and Mistress Page, in order to access their wealth. But the best friends team up to outsmart and outmaneuver him. Meanwhile, Mistress Page’s daughter, Anne, is pursued by three suitors, each one a different favorite of mother, father and daughter. Along the way, the romantic candidates individually pay the housekeeper to forward their cause. Jealousy abounds. Disguises, duels, and deceits lead to madcap hijinks. In the end, Falstaff gets his comeuppance and cupid prevails when Anne Page marries the love of her life.

Door Shakespeare is a professional theatre company producing the works of William Shakespeare in the gardens of Björklunden, just south of Baileys Harbor, from June 19-August 24. For more information, or to purchase tickets, visit www.doorshakespeare.com or call 920.839.1500.