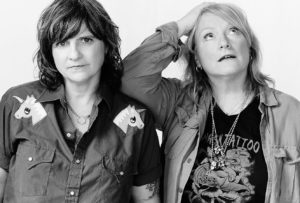 Amy Ray and Emily Saliers are Indigo Girls. Rolling Stone describes them as the “ideal duet partners.… When they sing together, they radiate a sense of shared purpose that adds muscle to their lanky, deeply felt folk-tinged pop songs.” The Grammy-winning duo became overnight folk-rock stars in 1989 and have maintained that status ever since, delivering their unique brand of openhearted songwriting and lush harmonies to sellout crowds worldwide. Melody-driven, densely lyrical hits like “Closer to Fine” and “Galileo” proved popular among folk audiences and casual radio listeners alike.

Indigo Girls’ constant touring, as well as their staunch dedication to social and environmental causes, has earned them a fervidly devoted fan following over the years. The duo has spent thirty-five years performing together, produced fifteen albums (seven gold, four platinum, and one double platinum), earned a Grammy and seven Grammy nominations, and have toured arenas, festivals, and clubs the world over. Perhaps Indigo Girls’ relevance over three decades can be credited to the mighty collisions of distinct aesthetics forging new paths over time.

Opening for Indigo Girls will be Nashville singer-songwriter Becky Warren, who has gained national attention for her work exploring the experience of modern-day veterans in her songs. Huffington Post says, “Once in a blue moon, you’ll hear an artist for the first time who presents a debut solo album with moving music and stirring lyrics that immediately touch the heart and soul. In 2016, Nashville singer-songwriter Becky Warren is that artist, and the potent, poignant War Surplus is that album.”