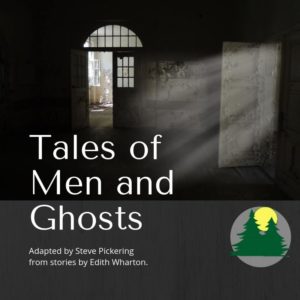 A play reading of “Tales of Men and Ghosts” adapted by Steve Pickering from stories by Edith Wharton is scheduled for Monday, March 4 at 7 p.m. at Björklunden, located at 7590 Boynton Lane, Baileys Harbor. “Tales of Men and Ghosts” features actors Cassandra Bissell, Neil Brookshire, Erica Elam, Amy Ensign, Kevin Christopher Fox, Neil Friedman, Anne Herring, James Leaming and Carmen Roman. “Tales of Men and Ghosts” is part of the Peninsula Players winter program, The Play’s the Thing, and is funded in part by a grant from the Wisconsin Arts Board with funds from the State of Wisconsin, as well as generous grants from Door County Medical Center, Friends of Door County Libraries and operating funds from Peninsula Players Theatre. Admission is free.

Playwright and actor Steve Pickering was inspired by Wharton’s vast collection of ghost stories and chose three to adapt to the stage, “Afterward” (1910), “Kerfol” (1916) and “Mr. Jones” (1928).  Haunted manors, buried secrets, human foibles, past indiscretions, futuristic warnings and ghostly presences that remind the living of the long-dead fill these suspense-filled tales.

“I loved stories that frightened me when I was a kid and found a way to justify that indulgence through stage adaptation as I grew older,” Pickering said. “Greg Vinkler is also a passionate enthusiast of the classic scary story – and I’m grateful to him for his encouragement and enthusiasm in the adapting of these.”

“Afterward” centers on Mary and Edward (Ned) Boyne, an American couple excited to use Ned’s business windfall to purchase their very own English country home with a ghost. Mary’s British cousin points them to their dream home and tells Mary and Ned the presence of the spirit will only make itself known long after its actual appearance. As the tale unwinds, Mary learns about a past business transgression, greed and retribution.

“Mr. Jones” features another mysterious English country home, the Bells, that falls under new ownership through an inheritance. When Lady Jane Lynke first tries to visit her new estate, the servant turns her away saying, “Mr. Jones says that no one is allowed to visit the house yet.” Lady Lynke eventually moves into the Bells and is determined to learn all its hidden secrets, despite the subterfuge and undermining efforts of its mysterious and unseen caretaker, Mr. Jones.

“This past summer we had some illness in our family down South, so I spent several months of long days and nights in hospital waiting rooms and corridors – and I found myself reading stacks and stacks of ghost stories to pass the time,” Pickering said. “I found them comforting – which surprised me – but I shouldn’t have been, as I’ve since come to realize they were actually giving me a useful release after wrestling with my own very real fears and anxieties.”

Edith Wharton was the first woman to be awarded the Pulitzer Prize for Fiction – for “The Age of Innocence,” her 1920 novel about New York in the 1870s. It was her twelfth novel and was initially serialized in 1920 into four parts, in the magazine Pictorial Review. Her other novels include “The House of Mirth” (1905), “Ethan Frome” (1911), “The Buccaneers” (1938) and more, as well as short story collections, poetry and non-fiction.

Edith Newbold Jones was born into such wealth and privilege that her family inspired the phrase “keeping up with the Joneses.” Wharton was the youngest of three children and spent her early years touring Europe with her parents and, upon the family’s return to the United States, she enjoyed a privileged childhood in New York and Newport, Rhode Island.

Using her brilliant natural wit and talent, she wrote insightful stories, often criticizing the moral failings of society, particularly those of the wealthy class into which she was born.  Besides her writing, she was a highly regarded landscape architect, interior designer and taste-maker of her time. She was often in the company of her close friend, Henry James, while they mingled with some of the most famous writers and artists of the day, including F. Scott Fitzgerald, André Gide, Sinclair Lewis, Jean Cocteau, and Jack London.

She married a wealthy sportsman, Edward Wharton, in 1885. They were ill-suited, yet enjoyed traveling together. In 1901, Edith purchased 113 acres in Lenox, Massachusetts on which she designed and built The Mount, a home evoking the spirit of its creator. Her marriage collapsed under the duress of her husband’s mental instability and they divorced in 1913.

She then moved permanently to France where she devoted herself to humanitarian works during World War I. Answering the calling of her writer’s impulses rather than returning to the United States, she became intent on witnessing the realities of war. She was one of the few writers and journalists allowed on the front lines. Wharton received the French Legion of Honor for her courage and humanitarian war work.

Cast in the reading of “Tales of Men and Ghosts” are Peninsula Players veterans Cassandra Bissell (“Miss Holmes,” “Around the World in 80 Days,”); Neil Brookshire (“Miss Holmes,” “The 39 Steps”); Amy Ensign (“Almost, Maine,” “Who am I this Time, the reading); Erica Elam (“Now and Then,” “Almost, Maine”); Kevin Christopher Fox (“The Actuary,” director); Neil Friedman (“Born Yesterday,” “Over the Tavern”); Anne Herring (“Go Back for Murder,” the reading); James Leaming (“Alabama Story,” “The Hollow”); and Carmen Roman (“Alabama Story,” “A Little Night Music”). The cast is under the direction of Peninsula Players Artistic Director Greg Vinkler.

Bissell and Brookshire recently performed in Renaissance Theaterworks’ production of “Photograph 51” while Friedman and Roman are reprising their roles as Vince and Marie Lombardi in “Lombardi” in Green Bay with Fox as Paul Hornung.

Elam has traveled the world with the critically-acclaimed musical improv group, Baby Wants Candy, and with The Second City on Norwegian Cruise Lines. Ensign is the Managing Director of Door Shakespeare and Henning is House Manager for Northern Sky Theatre. Fox recently directed the world première of Block St Theatre Co.’s “Flamingo & Decatur” at Theater Wit.

Leaming and Roman have toured the country in the two-person play “Botanic Garden” and have extensive television credits including “Law and Order,” “Chicago Fire,” “Prison Break,” “Chicago P.D.,” “Boss” and “Betrayal.”

The Play’s the Thing 2019 series concludes Monday, April 1 with the performance of “The Gentleman Thief,” formerly named “Love, the Cracksman,” a new fast-paced comedy by Mark Brown.