You are here: Home / Uncommonly Fine Writing / Goose and Guns 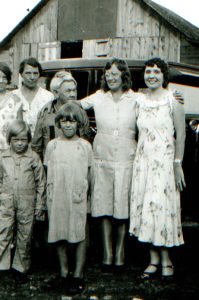 (From the just-published book “Stories From Yesteryear” by Elaine Johnson. Available at Al Johnson’s Swedish Restaurant & Butik in Sister Bay.)

The Sister Bay Bowl was altogether different years ago. Door County has changed these last thirty, forty years. You wouldn’t even think it’s the same place. Earl’s place, where the bowling alley is, was a dance hall. Where the dining area is now was living quarters and the bar ran along the dance hall. It was a pretty wild place.

We had turkey shoots and goose shoots, so you’d go to those. They would put like a funnel over the turkey and put him behind a log so the only thing that really stuck up was its head, to see who could shoot them. If nobody shot the thing they’d buy a new goose or they’d buy the turkey. So there was a guy by the name of…I can’t think of that guy’s name. Well it doesn’t matter, you wouldn’t know him anyway. He came in there and he had had a few drinks. He had a goose in a burlap bag. He was telling everyone how he went to this goose shoot. He got this goose first prize, hit the target.

They said, “Oh, you never got that goose.” 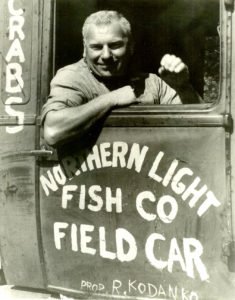 So he reached down in that bag, held the bag, and pulled out this goose and let her go. That goose was loose, heh, flew one end to the other and Earl was running with a cue stick trying to hit that goose as it went by. He never did hit the goose, Hartman or something like that was his name. He got him again and stuck him in the bag.

But they had this machine there that had a bear on it, had a little eye on it. So we thought we would shoot and see who shot the worst, would have to buy a drink. So we all got out there with this gun, this ray gun and we’d shoot and got special marks or whatever it was. So Jerry Burress, he just couldn’t seem to hit that bear at all. So he had to buy and buy and buy and buy. So he said, “I will be right back.”

He was gone for a little while and pretty soon he came in and said, “Now I’m going to shoot my own gun.” Shot this gun, a thirty aught six. Boom! Went right through the machine, thru the wall. Earl threw the whole bunch of us out. But it was fun.