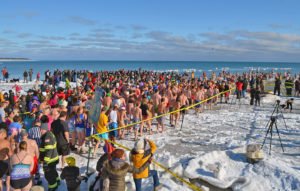 The Jacksonport Polar Bear Club is preparing to take their annual plunge into Lake Michigan for the 33rd time at 12 noon on Tuesday January 1, 2019.

For the past thirty-two years the Jacksonport Polar Bear Club has celebrated the New Year by going for an icy dip into Lake Michigan at Lakeside Park in Jacksonport along Door County Wisconsin’s eastern coast.  More than 500 swimmers are expected to take the plunge during the group’s 33rd annual event, which puts this polar bear swim among some of the largest in the country.

The swim will be held precisely at 12 noon central time, with the crowd favorite 10 second countdown preceding a massive influx of swimmers into the lake.

Festivities at Lakeside Park in Jacksonport will begin around 10:30 AM on New Year’s Day.  Registration for all swimmers will take place in the park shelter closest to the lake. While the event is free, all swimmers are asked to sign a liability release form before participating in the event. Forms will be available at the registration pavilion or swimmers can save time by downloading the form to fill out ahead of time at JacksonportPolarBearClub.com and simply drop it off the day of the event.

A variety of Jacksonport Polar Bear Club merchandise, including t-shirts, hats, hoodies and other items will be available for purchase at the registration pavilion. New this year, shirts may be ordered ahead of time, look for details on the Club’s Facebook page.  Free Jacksonport Polar Bear Club certificates of achievement will also be available to all swimmers when they register.

The club first started in Jacksonport in 1986 with one swimmer, J.R. Jarosh. It wasn’t until 1989 that the number tripled from one to three swimmers, including Heidi Hodges, a local reporter and fellow fan of cold water swimming whose participation helped provide substantial media coverage for the event in the early years.  The club has seen substantial growth since then, and in 2010 an estimated 900 swimmers went in.  Last year’s swim was the coldest swim on record, and attracted an estimated 200 swimmers, with several hundred more bundled up spectators there to witness the event and cheer on the participants.

“It’s simply amazing how the event has grown over the years,” said club founder J.R. Jarosh, who was 14 years old the first year he went in back in 1986. “To see how so many people have embraced the opportunity to battle the elements and celebrate the new year by going for a dip, it’s great,” he said.

Jarosh said to celebrate the 33rd annual swim, “we are encouraging costumes of any kind this year, be it one you’ve worn before, a new one or just something fun you’ve had in your closet for 30 years,” he laughed. While costumes are encouraged, they are by no means required.

Music on the beach will be provided by Loud Entertainment DJ Service. People attending should listen for announcements on the beach leading up to and during the event. Spectators are asked to stay outside of the yellow taped areas on the beach, which are designated for swimmers only.

Participants and spectators are also encouraged to bring a non-perishable food item to donate to Feed My People, a local Door County food pantry, which will be accepting food and cash donations near the registration pavilion. Waseda Farms will also be on hand selling Organic Bone Broth to help keep folks warm, with 100% of the proceeds benefitting the Jacksonport Fire Department and Feed My People.

Additional information and tips for swimmers can be found on the club’s web site, JacksonportPolarBearClub.com or their official Facebook page.