A weekend of fun and excitement is on tap in Jacksonport over Memorial Day weekend as the community prepares for the 46th annual Maifest celebration, scheduled for Saturday May 26 and Sunday May 27, 2018. Since 1973, the lakeshore community has hosted Door County’s unofficial summer kick off festival at Lakeside Park, located at the intersection of County V and Highway 57.

Event highlights will include the grand parade at 10:30am on Saturday, a juried arts and crafts fair beginning at 9am both days, live music in the performance tent both days, the Maifest 10K and 2 mile fun run/walk at 9am on Sunday and the Frontier Farmers horse pull beginning at 1pm on Sunday at the ballpark. Food and beverages will be served all weekend and inflatable activities with a variety of games will be available both days in the Maifest Family Midway.

The juried arts and crafts fair begins at 9am both Saturday and Sunday and will feature nearly 100 artists and craftspeople from around the Midwest.

The popular Maifest parade begins its 46th running at 10:30am on Saturday and will proceed through Jacksonport along Hwy 57, from Cave Point Drive on the south end of town down past the Square Rigger Lodge on the north end of town. This year’s honorary Parade Marshalls are Sue and Joe Jarosh – they have been actively involved in the Jacksonport community for 35 years.

Immediately following the parade, there will be a colorful Memorial Day weekend presentation of the flag by V.F.W. Post 3088 in Lakeside Park. A special Maypole dancing ceremony will take place at 12 noon in the park as well.

Live entertainment will be available both days in the performance tent, located in Lakeside Park next to the concession stand, with a performance by longtime festival favorite Jerry Voelker & His Jolly Gents beginning at 12pm on Saturday. On Sunday, the performance tent will showcase the music of the Modern Day Drifters from 11am–3pm. 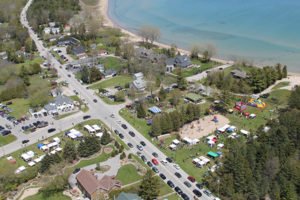 On Sunday morning it’s time to lace up your running shoes for the 36th annual Maifest 10K (6.2 miles) and 2 mile fun run/walk. The race starts at 9am in Lakeside Park and takes runners and walkers through the woods and out to Clark Lake and back on scenic Lakeshore Road and Cave Point Drive. Race registration is strongly encouraged and can be done ahead of time by registering online, filling out a race entry formon Jacksonport.org or by registering on race day morning from 7-8:30am at the concession stand in Lakeside Park. The Maifest run is part of the Run The Door race series.

The Frontier Farmers Horse Pull is an extremely popular activity at Maifest and will take place at the ballpark on County V, one block from Lakeside Park, on Sunday afternoon. The festivities begin at 12 noon with the singing of the national anthem, followed by a 4-H Horse and Pony Drill Team performance and a special trick roping exhibition by Chewy, a local Door County resident known for his amazing cowboy rope tricks.

The main event, the Frontier Farmers Horse Pull, will begin at 1pm. Horse teams from around the Midwest will compete to see which team of 2 draft horses can pull the heaviest load in this classic match-up of horse power and team cooperation.

The 46th annual Maifest celebration is shaping up to be another fun family event. Come enjoy all that Jacksonport has to offer along the lakeshore this Memorial Day weekend. Download a complete festival schedule of events here.

Maifest is sponsored by the Jacksonport Advancement Corporation (JAC), a non-profit organization working for the betterment of the community. Proceeds from Maifest totaling nearly $500,000 over the past 45 years have been spent on a wide variety of community endeavors, including improvements at Lakeside Park, the town ballpark and the Jacksonport Town Hall building. Equipment has been purchased for the Jacksonport Fire Department and the Jacksonport First Responders. Sevastopol School has received funds to support extra-curricular activities such as Destination Imagination, the Senior Graduation party, the Reading is Fun Program, the Music, Art and Theatre Guild and sports programs. The JAC has supported the youth of Jacksonport over the years through the 4-H program, the Horse and Pony Project, the Little League and scholarships for those students continuing their education after high school. JAC also sponsors the community Christmas party held in December each year.

Additional information, registration details and a schedule of events for Maifest can be found at http://www.jacksonport.org/maifest/.