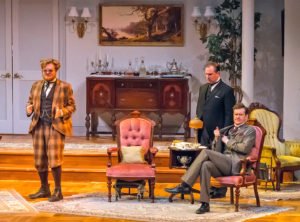 “The Peninsula Players extends congratulations to its past and current company members on their artistic accomplishments in the Chicago area,” said Greg Vinkler, Players Artistic Director.  “Every season we work to bring the finest talent there is to Door County audiences, and every season with the announcement of the ‘Jeffs,’ I am delighted to see many Players being recognized for just that – the best.”

The Joseph Jefferson awards, established in 1968, annually honor outstanding professional theater artists in the Chicago theater community.  Matt Crowle, director of “Peter and the Starcatcher” is nominated for both Best Direction and Best Choreography for “Crazy for You” at Drury Lane.

Mercury Theater Chicago’s production of “Disney’s Mary Poppins” is nominated in the Musical-Midsize category and featured several Peninsula Players in its cast including Crowle (“Peter and the Starcatcher,”) Cory Goodrich (“The Bridges of Madison County,”) Lanyon (“Lend Me a Tenor”) and Kevin McKillip (“The 39 Steps,” “Noises Off.”)

Cassandra Bissell (“Proof,” “Is He Dead?” “Around the World in 80 Days,”) who participated in the 2017 Peninsula Players winter play reading of “Miss Holmes,” is nominated as Best Principal Actress in a Play for her portrayal of Henrietta Leavitt in “Silent Sky” at First Folio Theatre.

Faye Butler(“Nunsense II”) is nominated in the best Supporting Actress-Musical category for her portrayal of Matron Mama Morton in “Chicago The Musical” at Drury Lane Theatre.

Jim Corti, who directed “Sherlock Holmes: the Last Adventure” at Peninsula Players, is nominated for his direction of “Sweeney Todd: the Demon Barber of Fleet Street” at Paramount Theatre which included Clingman and Will Skipp (“Chicago”) in the cast.

Christopher Kriz, sound designer of this season’s “The Actuary,” “Peter and the Starcatcher” and “Lord Arthur Savile’s Crime,” is nominated for Original Music for First Folio Theatre’s production of “Silent Sky.”

Jack Magaw’s scenic design work was seen on the Peninsula Players’ stage this season in “The Bridges of Madison County” and “Lord Arthur Savile’s Crime.” Magaw was nominated for his design of “East Texas Hot Links” at Writers Theatre and among the cast was A.C. Smith (“The 1940s Musical Comedy Murders,” “Shady Business.”)

Kymberly Mellen (“Angel Street,” “Unnecessary Farce”) is nominated in the best Supporting Actress – Play category for her portrayal of Susan Mary Aslop in “The Columnist” at American Blues Theater.

Doug Peck (“Into the Woods”) was nominated for his musical direction of “Wonderful Town” at the Goodman Theatre.

Prior to performances, theater patrons picnic and relax on the grounds while watching the setting sun over the waters of Green Bay from the cedar-lined shore and enjoy the ambience of the Beer Garden and other gardens.

The Peninsula Players curtain times for “Lord Arthur Savile’s Crime” are Tuesdays through Saturdays at 8 p.m. and Sunday, Sept. 3 at 4 p.m.  Curtain times for the forthcoming offbeat comedy “Almost, Maine” by John Cariani are Tuesdays through Sundays at 7 p.m., except for Sundays, September 17, October 1 and 15 at 3 p.m.  Individual tickets range from $38 to $44.  The theater and Box Office are closed on Mondays.  For more information or to reserve tickets phone the Peninsula Players’ Box Office at 920-868-3287 or visit the website at www.peninsulaplayers.com.