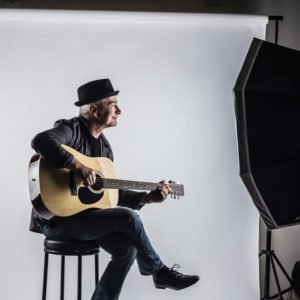 Hagen comes from five generations of Islanders who have made music an important part of their daily lives.  Hagen says, “Spending nearly forty years playing, writing, performing and producing music, I can confidently say that there will always be a story to tell, a new song to write, and a melody to strum.”

Hagen began writing music at the age of sixteen and categorizes his music as folk-based.  James Taylor, John Denver and Bob Dylan are musical performers that influenced his music. He began performing professionally with his family at the age of 15 and had no idea music would become a lifetime career. His songwriting style is country/folk.

Julian Hagen’s heart shines through every song he has written and his humor and reverence for friendships, the land and the lake are deeply rooted in his songs. Please don’t miss a chance to hear Washington Island’s glorious troubadour at Woodwalk Concerts this Friday. Who knows who he will bring along to sing with him, there are always surprise with Julian!