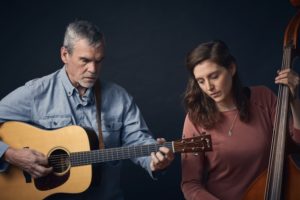 Two family bands come together for one night of great music. Last Acre and Small Forest will be performing at Woodwalk Concert Series July 27 at 7 pm.

Last Acre is Mark and Molly Mathewson, a father and daughter from Illinois. The duo has performed across the Midwest, opening for acts such as Robbie Fulks and Antje Duvekot. Their sound is rooted in traditional Appalachian folk music, with one foot in bluegrass and the other in the prairie songwriting sensibilities of Greg Brown and John Prine. With blood-kin harmonies and dry, tongue-in-cheek repartee, the two have been called “as much of an emotional feeling as a musical moment” (Tom Irwin, Illinois Times). Mark Mathewson is a winner of the Chris Austin Songwriting Contest (Merlefest). His songs have been recorded by a number of bluegrass acts, including 2017 Grammy nominee Blue Highway, The Lonesome River Band, Ernie Thacker, Kenny Smith, and Josh Williams.

Small Forest is a local Door County Band comprised of Jeanne Kuhns and Marybeth Mattson a mother- daughter singer/songwriting team with Pat Palmer on bass. Often compared by their listeners to The Indigo Girls, their sound is unique, with their music a fusion of two generations of folk, rock, pop and blues influences. They are known for beautiful harmonies and a visable joy in singing together that captures the hearts of audiences. Their lyrics are poetic and full of passion for life and the plight of the world. Small Forest travels the Midwest and has played at many venues large and small and have been repeat guests on Lilli Kuzmas Folk Festival Show on WDCB Public Radio in Illinois. In 2017 they received honorable mention in the readers choice best musician awards from Door County Magazine. Small Forest is the house band and hosts for the Woodwalk Concert series and is delighted to share the night with the wonderful duo of Last Acre.

Concert starts at 7pm on July 27. Doors open at 5:30 for early picnickers. Drinks and ice cream treats will be for sale. Tickets are $20 cash at the door. Woodwalk Gallery is at 6746 County G in Egg Harbor.