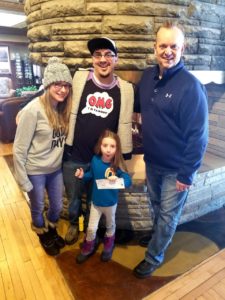 The Lodge at Leathem Smith’s Snowy Days Medallion $1,000 Search is officially over.

The Lodge at Leathem Smith’s Snow Days Medallion Search started on February 4, 2019 and ended on February 22nd, 2019 after 18 cryptic clues were released.

Participants of the Snowy Days Medallion Search were able to purchase a five dollar button for the chance to win $1000. All proceeds from the button sales were donated to the Wisconsin Humane Society Door County Campus.

Jedediah Schulz was the big winner and found the medallion located under the small bridge on Utah Street in Sturgeon Bay near Cross Roads at Big Creek. He did purchase a button earning him a $1,000 prize for finding the medallion.

Jedediah, his wife Kristen, and their daughter, Violet, studied every clue together and drew up maps to determine where the Medallion could be hidden. Violet even memorized clues and went with them on their searching. The 18th clue was the one that helped them secure the location of the medallion. The clue stated, “Some will fail this seemingly impossible quest. Here is a critical detail, I’m further east than I am west.”

The owner of The Lodge at Leathem Smith, Paul Maleen, stated, “The Snow Days Medallion Search is meant to give families something fun today in the winter while raising money for a great cause. That was accomplished this year with the Schulz family working together and creating family memories.”

The Lodge at Leathem Smith would like to thank everyone for participating and good luck next year.