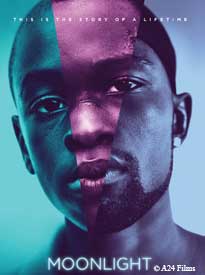 On February 16 and 17, Door Community Auditorium (DCA) will present a lively weekend of film (a screening of “Moonlight”), lecture (about Latinos in the American electorate and beyond), and music (Door County singer and guitarist Ben Larsen).

Movies at The Door: “Moonlight”

On Friday, February 16 at 7 p.m., DCA will present a screening of the Academy Award-winning film “Moonlight.” The film tells the tender, heartbreaking story of a young man’s struggle to find himself, told across three defining chapters in his life as he experiences the ecstasy, pain, and beauty of falling in love, all while grappling with his own sexuality. “Moonlight” received near-universal acclaim upon its release, winning Academy Awards for Best Picture, Best Supporting Actor (Mahershalah Ali), and Best Adapted Screenplay.

The screening of “Moonlight” (rated R) is free to the public. Freewill donations are encouraged.

On Saturday, February 17 at 10 a.m., DCA will offer a lecture entitled “Latinos in the American Electorate and Beyond: Identity, Language, and Issues,” presented by St. Norbert College assistant professor of political science Dr. Saavedra Cisneros. Cisneros will explore some broad realities about Latinos in the United States, including growth and geographic trends as well as political facts and figures. Relying on his recently published book “Latino Identity and Political Attitudes: Why Are Latinos Not Republican,” Cisneros will present his theory of Latino Identity and Partisanship and how it relates to past and future political contests.

Cisneros’s lecture is free to the public (freewill donations encouraged). Refreshments from Base Camp Coffee Shop will be available for purchase.

On Saturday, February 17 at 7 p.m., Door County’s own singer/guitarist Ben Larsen will perform in the cozy DCA Fireside Lobby. Larsen, a Sturgeon Bay native, has been singing since kindergarten. While still in high school, Larsen was the drummer for the band Fresco, also featuring Sturgeon Bay musician Michael Raye. He was also a member of legendary Door County band The Johnsons. In young adulthood, Ben Larsen performed for several years with the Heritage Ensemble (now Northern Sky Theater), during which time he learned to play guitar. After taking a hiatus to raise his kids, Larsen put his solo act back together and now performs his trademark brand of smooth pop-folk across the Door peninsula.

Tickets for Larsen’s concert are $17.50. Refreshments from Base Camp Coffee Shop will be available for purchase. All seats are general admission and seating is limited. Advance reservations are recommended and can be made at the DCA box office, located on Highway 42 in Fish Creek. The box office is open Monday-Friday, 12-5 p.m. Tickets can be purchased in person, on the phone at (920) 868-2728, or online at www.dcauditorium.org.