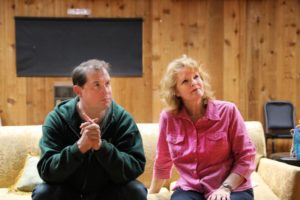 Peninsula Players Theatre, America’s Oldest Professional Resident Summer Theatre, presents the regional première of “Living on Love,” a new romantic comedy by two-time Tony Award-winner Joe DiPietro, based on the play “Peccadillo” by Garson Kanin.  The delightful “Living on Love” opens at Door County’s theatrical icon on Wednesday, August 25 and performs through September 2 and is a glamorous, hilarious romp through the world of music, marriage, celebrity and love!

Celebrated opera diva Raquel De Angelis’ temperament and sense of self-importance are legendary; her erratic, tantrum-throwing behavior extends from backstage to her own home. This unpredictable legend doesn’t even step into her own living room without making sure she has the proper lighting, entrance music and drop-dead outfit.

The only person whose ego is more massive and flamboyant than hers is that of her equally world-famous husband, the Italian maestro Vito De Angelis. Both the fiery conductor and the diva extraordinaire relish their 1950s glamourous lifestyle and Manhattan penthouse. They depend on the attentive care of their highly competent servants, two former opera singers named Bruce and Eric. Despite the apparent opulence of the penthouse, their careers are on the wane and they need money to pay for this colorful existence. Voilà! Vito will write his memoirs and instantly make millions!

“’Living on Love’ is full of wonderful characters who live to the fullest,” said director Linda Fortunato, who directed the Peninsula Players hilarious productions of “Lend me a Tenor” and “The Fox on the Fairway.” “The opera singer and the conductor have lived their lives in the spotlight and created personas to exist in that world. After many years, it has become unclear where the larger-than-life persona ends and the real person begins.”

True to his boasts of romantic conquests, Vito quickly becomes enamored with a career girl named Iris Peabody, the ghostwriter his publisher sends to oversee completion of the memoir. Raquel, to make Vito jealous, hires intense young Robert Samson to do the same for her. Fortunately, as fireworks spark between the kindred narcissists, those caught in the middle are looked after by the resourceful Bruce and Eric.

Crowle directed the Peninsula Players productions of “Peter and Starcatcher” and “The Drowsy Chaperone.” His recent performance credits include Cosmo in “Singin’ in the Rain” at Drury Lane, Bert in “Mary Poppins” at Paramount and Rooster in Skylight Music Theatre’s production of “Annie.”

Ernster recently performed on Broadway in the Tony Award-nominated “War Paint”with Patti LuPone and Christine Ebersole. LuPone and Ebersole portrayed rival cosmetics giants Helena Rubinstein and Elizabeth Arden. Ernster won Chicago’s Joseph Jefferson Award for her portrayal of Mrs. Anna in “The King and I” and Lady Jacquie in “Me and My Girl.” Additional stage credits include Mrs. Higgins in Paramount Theatre’s production of “My Fair Lady” and Sylviane in Chicago Lyric Opera’s production of “The Merry Widow.” Her television credits include “Chicago Justice,” “Empire” and “Love Hurts.”

Hamilton (“The Drowsy Chaperone,” “Miss Holmes,” “The Bridges of Madison County”) is cast as the greatest conductor on the planet, Vito. Hamilton was in the Off-Broadway hit “Ride the Cyclone” and was Harry Bright in Marriott Lincolnshire Theatre’s “Mamma Mia!” His regional credits include Asolo Rep, Timberlake Playhouse, Mercury Theater, Drury Lane Theatre, the Goodman Theatre and the Tropicana in Las Vegas.

Fortunato, a veteran Peninsula Players company member and choreographer, is also the Artistic Director of Theatre at the Center in Munster, Indiana, where she directed “Cabaret,” “Big River,” “The Tin Woman,” “Steel Magnolias” and choreographed “42nd Street” (Jeff Award), “Spamalot” and “Crazy for You.” Her credits also include productions at American Players Theatre, Marriott Theatre, Drury Lane Oakbrook, TimeLine, Writers Theatre and BoHo.

“’Living on Love’ is funny in different ways,” Fortunato said. “There is comedy within the language, the quirkiness of the characters, and in how these varied characters come together in surprising and funny situations. Like, ‘Lend Me a Tenor,’ ‘Living on Love’ features an opera singer as a main character, but knowledge of opera is not necessary as it is a comedy that features flamboyant personalities in the music world.”

DiPietro won two Tony Awards for co-writing “Memphis,” which also received the 2010 Tony, Drama Desk and Outer Critics Circle Awards for Best Musical. His other plays and musicals include “I Love You, You’re Perfect, Now Change” (the longest running musical revue in Off-Broadway history); “The Toxic Avenger” and “The Thing About Men” (both winners of the Outer Critics Circle Award for Best Off-Broadway musical); the much-produced comedy “Over The River and Through The Woods,” “The Art Of Murder” (Edgar Award winner for Best Mystery Play) and the Broadway musical “All Shook Up.”

Kanin is best known for the 1946 hit comedy “Born Yesterday,” which was filmed in 1950, featuring Judy Holliday and directed by George Cukor. Kanin wrote several hilarious screenplays for Cukor, usually in collaboration with his wife, Ruth Gordon, including “Adam’s Rib” and “It Should Happen to You.” Kanin was inducted into the American Theater Hall of Fame in 1985, the same year he wrote “Peccadillo.”  His novel “Smash” was recently adapted for television.

The award-winning design team of the luxurious 1957 Manhattan apartment and lifestyle are scenic designer Jack Magaw (“Miss Holmes,” “The Bridges of Madison County”) and costume designer Kärin Simonson Kopischke (“The Drowsy Chaperone,” “Chicago,” “Sunday in the Park with George”). Reuniting from their earlier collaboration on the world première of Sean Grennan’s “Now and Then” are lighting designer Steven R. White,sound designer Michael Tutaj and properties designer Pauline Oleksy.

“Living on Love” is sponsored by Main Street Market.

Peninsula Players is a professional, not-for-profit theater that collaborates with members of Actors’ Equity Association (AEA), the union of professional actors and stage managers; United Scenic Artists (USA), a labor union and professional association of Designers, Artists and Craftspeople and the Stage Directors and Choreographers Society (SDC), a theatrical union of stage directors and choreographers.

“Living on Love” performs Tuesdays through Saturdays at 8 p.m. and Sundays at 7:30 p.m., except for Sunday, September 2 at 4 p.m. A post-show discussion will be held on Friday, August 24 with the creative team and cast, and a pre-show seminar will be hosted by ghostwriter Patricia Skalka on Thursday, August 16 at 6:30 p.m. in the theater. For information or tickets, phone the Box Office at (920) 868-3287 or visit www.peninsulaplayers.com.