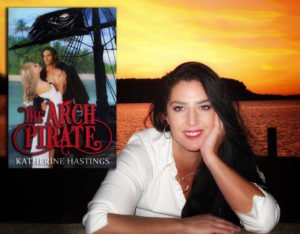 Based on the real-life pirate Captain Henry Avery, Hastings crafted her own romantic tale around the events that led to Captain Avery pulling off the most profitable treasure heist in history. The Arch Pirate is the story about what could have happened in the one year Captain Avery sailed into a life of piracy before disappearing to whereabout unknown with the treasure and his life… one of the only pirates to do so.

“The story of Captain Avery captured my attention a few years ago,” Hastings said. “There is so much mystery and intrigue in his actual life, which is quite a story all on its own. Very little verifiable fact exists about the legendary Arch Pirate, and every story you read varies from the next. Some say he was the most feared and ruthless pirate on the high seas. Others say he was a gentleman pirate who only wanted to care for his crew. It was this open-ended tale that inspired me to fill in the blanks with my own version of his story.”

The Arch Pirate starts off where Captain Avery’s real-life history begins… where he mutinies with his crew after they are left stranded for months in Corunna with no pay and no way to return home.

“In the real story of Captain Avery, we know he was retired from the Royal Navy and working on a warship where he and his crewmates were promised pay that never came. Avery and the crew mutinied after many months, and they set sail for pirate-controlled Madagascar where they would join forces with other infamous pirates to go after the largest treasure heist in history. Everything else I’ve read about him changes with the source, with little to no verifiable fact. So that is where I used my author liberties to craft a book about what I hoped his story was. The Arch Pirate is a fictitious story, but it does follow the known timeline and travels of Captain Avery and his crew. I had a wonderful time researching his history and crafting my own version of his tale. And since I’m a romance writer, of course I envisioned a beautiful woman shaking things up for our notorious pirate!”

The Arch Pirate is the fifth historical romance novel from Katherine Hastings. And it is the last historical novel she will release for the near future, with her attentions turning to her new contemporary romantic comedies all set in Door County that will start releasing May 22, 2019.

“I love writing historical romance,” said Hastings, “but I had some fun ideas for stories set in Door County, so I shifted gears and have been focused on writing those. The first book releasing May 22, The Big One, is a standalone romance set in Door County and Italy. The rest of the books to follow will be part of a connected series set entirely in Door County called Door Peninsula Passions. Readers will find many local businesses and locations featured in these books, and I’m really excited to introduce the world to my little slice of heaven up here in Door County.”

All of Hastings novels can be found on Amazon in both paperback and digital forms. For more information about her books and new releases, visit www.katherinehastings.com.

Based on the actual events of real-life pirate Captain Henry Avery, The Arch Pirate twists and twirls blending fact with fiction in an adventure-filled 17th century pirate romance.

While Avery and his crew make for Madagascar to start off their new life of piracy, they capture a Dutch ship along the way. It isn’t gold Avery finds in one of the chests they brought on board, but it’s treasure none-the-less… an exquisite woman unlike any he’s ever seen. Enraptured by her beauty and unable to return her to her own long-departed ship, Avery promises to keep her safe until he can secure her return passage home. But after he strips away the years of etiquette drilled into Lady Aleida Van Imhoff, it isn’t him doing the stealing this time… it seems she’s stolen his heart.

Aleida finds herself captured by Captain Avery’s crew while en route to marry the heir to the Dutch India Trading Company. She had thought being forced to marry the arrogant Albertus was the worst thing to happen to her… until she ended up on a ship filled with pirates. But the notorious Arch Pirate turns out to be more mischief than murderer, and soon she’s hoping her rescuers never arrive. Ensnared by Avery’s roguish charm and the temptations of a life unknown, the two soon find themselves on an adventure in pirate-controlled Madagascar.

Torn between family duty and her love for Captain Avery, Aleida must decide who wins the battle raging inside her. Will she choose her heart or her head?