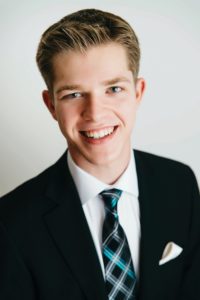 The Gesualdo Six, a men’s vocal consort from the United Kingdom, recently announced the results of their worldwide choral competition and the Midsummer’s Music 20-year-old Composer In Residence is a winner.

Jacob Beranek hails from Oconomowoc, WI, and was named the “21 years and under” category winner. His composition, Abendgebet (Evening Prayer) will be premiered by the Gesualdo Six in Cadogan Hall, London, England, on March 7.

Beranek’s piece is based on a text written by Dietrich Bonhoeffer, a German pastor, theologian, and anti-Nazi dissident. Bonhoeffer’s writings on Christianity have become widely influential, and this text is based on an evening prayer he wrote while in prison. Bonhoeffer was arrested in April 1943 by the Gestapo and imprisoned for one and a half years. Later, he was transferred to a Nazi concentration camp. He was accused of being associated with the July 20 plot to assassinate Adolf Hitler and was quickly tried and executed on April 9, 1945.

“Writing this piece was a huge growing experience for me, and a joyful one,” says Beranek. “I’ve never had music come to me so quickly, even though it was difficult to set a text entirely in German and write for six independent voices. I’m just so honored that my music was chosen to memorialize Bonhoeffer and all that he stood for in this way.”

Owain Park, Director of The Gesualdo Six, writes: “We were all thrilled with the standard of the entries, 306 in total, which arrived from six continents in a variety of interesting styles. Singing through the pieces has been an immensely enjoyable experience, and it is heartening to see composers writing so well for the ensemble’s specific requirements.”

Composer Jacob Beranek has won many awards for his compositions and has been honored to have his music programmed widely, including recent performances in Illinois, Minnesota, North Dakota, Oklahoma, Pennsylvania, Tennessee, and Wisconsin, as well as the Czech Republic and Switzerland. He is the first-ever Composer-in-Residence for Midsummer’s Music in Door County. This summer will be his third summer in that role. Beranek is currently studying music composition at Vanderbilt University’s Blair School of Music in Nashville, TN.

Beranek has been busy lately, as he recently traveled to the Czech Republic for the European premiere of his wind band piece, Památník (“Memorial”), performed by Col. Dr. Václav Blahunek and the Band of the Castle Guard & Czech Police in Spanish Hall at Prague Castle on November 18.

Midsummer’s Music was co-founded in 1990 by Jim and Jean Berkenstock, long-time Door County summer residents and, until retirement, principal orchestral players with the Lyric Opera of Chicago. The organization has drawn on the extraordinary talent of professional musicians and artist/faculty of universities throughout the Midwest. Offering chamber music for winds, strings, and piano performed in intimate settings throughout Door County, venues include art galleries, churches, and private homes. From such masters as Mozart, Schubert, and Dvořák to some lesser-known but very accomplished composers, each concert is an unforgettable musical experience.