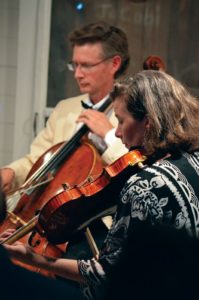 Midsummer’s Music continues its unique twist on the Million Dollar Quartet while adding a new program of exotic music.

Midsummer’s Million Dollar Quartet is a hypothetical version of the 1956 impromptu jam session between Johnny Cash, Elvis, Jerry Lee Lewis, and Carl Perkins. Instead of Cash, Franz Joseph Haydn is on violin. Instead of Elvis, Mozart plays viola. Johann Vanhal (cello) and Carl Ditters von Dittersdorf (violin) instead of Lewis and Perkins. They met in the plush Viennese residence of Stephen Storace and his sister, Nancy, somewhere around 1784. We know about this evening from Michael Kelly, a singer from England, and guest that evening who noted the event in his reminiscences. Herr Storace, as fly-on-the-wall that evening, has accepted Midsummer’s invitation to attend this re-creation and to tell us, via actor Mark Moede, how this historic evening progressed.

As a part of Midsummer’s continuing reference to the Celebrate Water initiative, Haydn’s “Frog” Quartet reminds us, through its croaking sounds, that all species require water, and for some like the frogs, even for procreation!

Collaborations have become a norm for Midsummer’s Music. In particular, Midsummer’s Music explores the connections between music, visual art and written word. We are fortunate to have great partners in Write-on Door County and Woodwalk Gallery. Throughout the season, concertgoers can hear a new poem or see a new work of art created in response to the music selections of the particular program. In most cases we get to meet the artist or poet and hear how they were inspired in a new creation. Hear a new poem in each series including Friday, June 29, at the UUF in Ephraim and Monday, July 2, at the Old Gibraltar Town Hall in Fish Creek. The first artist collaboration is Wednesday, June 27.

The From Homespun to Exotic program includes Schubert’s Notturno, Haydn’s Piano Trio, and Raff’s Piano Trio No. 2. The three German/Austrian composers stretch the boundaries of their native existence via their music. Schubert was known for his intimate gatherings where friends shared music and poetry in someone’s home. These Shubertiaden, as these evenings were called, were filled with jovial friends as they talked and listened to music into the wee, small hours. The Notturno is a beautiful example of what might have been heard in this intimate, homespun atmosphere.

Haydn was also basically a homebody, but he travelled late in life to England for two extended trips that resulted in his 12 London Symphonies; however, he also took imaginary musical trips to exotic places, as in the Gypsy-style music incorporated into the last movement of his G Major Trio.

Raff does the same thing in the last movement of his Trio, although this trip takes him to Turkey with much bravura and swagger.

The Homespun to Exotic concerts are 7:00 pm June 29 at the Unitarian Universalist Fellowship in Ephraim; 3:00 pm June 30 at Hope United Church of Christ in Sturgeon Bay; and 7:00 pm July 3 at St. Luke’s Episcopal Church in Sister Bay. Tickets for these concerts are $29 for adults, $10 for students, and free for children 12 and under.