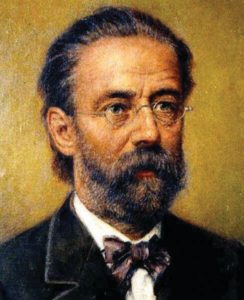 Though few in number, Smetana’s chamber music compositions play an important role in his musical output. The piece Midsummer’s ensemble will play is a string quartet titled Z mého života é (From My Life), which was written in 1876. Notable features include a prominent viola solo in the first movement, and a sustained harmonic E on the first violin in the final movement, which was described by Cobbett’s Cycolopedic Survey as “one of the saddest moments in all chamber music.”

In 1892, Dvořák moved to the United States and was named Conductor and Director of the New York National Conservatory. During his stay in this country, he vacationed in the Midwest town of Spillville, Iowa. It is there in the summer of 1893 that he added the Quintet in E-flat Major, Op. 97 – for two violins, two violas, and cello – to his list of American-bred compositions. The influence of American Indian music and culture is immediately apparent in the rhythms, melodies and modal harmonies.

Jacob Beranek was named Midsummer’s Music Composer-in-Residence in 2017, and he continues his role this season with a new composition – Partita melodica – which will have its world premiere in this program. In describing his inspiration for the piece, he said, “After experiencing Margaret Butler’s masterful performances on English horn last year, I approached her about composing a piece to feature her spectacular instrument this season. That being said, I did not want to write an English Horn ‘concerto.’ While the English horn is unique and deserves the attention, I intended to rightly highlight every fantastic Midsummer’s musician that would be performing in the piece, not just the English horn. Having written a lot of programmatic music lately, I also wanted to use this piece as an opportunity to move away from explicit narrative and instead try to hold the audience’s attention via purely musical means.”

In addition to individual tickets, flex-packs of six or eight tickets are available and can be ordered online at midsummersmusic.com or by phone at 920-854-7088.