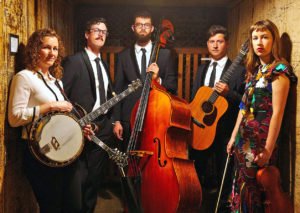 Mile Twelve, a bluegrass band based in Boston, will be featured in concert at the White Gull Inn in Fish Creek on Wednesday, May 1. Tickets for the 8 pm concert are $22.

Although their sound is rooted in traditional bluegrass, Mile Twelve surveys a broader landscape on their newest album, City on a Hill. All five band members bring their own influences and observations into the music, resulting in a project that feels contemporary, thoughtfully crafted, and relevant.

“Original bluegrass music, written and played by young people, is very much alive,” says band member Evan Murphy. “I hope people take away that songwriting and arranging really matter. It’s about the material and playing it in a way that feels honest. This album isn’t political in the sense that we’re beating people over the head with anything, we just tried to tell stories that feel authentic.”

“We all inspire each other and recognize that everyone has different strengths,” Murphy says. “What makes this band so collaborative is that everyone in the band can do something at a really high level. That’s the balance. We’re all challenging each other.”

Those kind of accomplishments were far from anyone’s minds when Murphy, Sabat, Keith-Hynes, and Bowness started crossing paths at house parties and pick-up gigs in Boston. In time, they recognized each other as regulars at a Cambridge dive bar called The Cantab Lounge during Tuesday night bluegrass jams. In 2014, they decided to start their own band. By gathering grassroots and industry support, they were well on their way when Benedict, who was living in Nashville at the time, relocated to Boston to join the band in 2016.

Bryan Sutton, who co-produced City on a Hill, observes, “I’m a fan of bands who strive for a balance of being musically unique and individualized, while at the same time working to include time-honored traditions found in this music. This blend is not an easy thing to accomplish. Mile Twelve does this with well-honed and refreshingly honest songwriting, along with powerful playing, singing, and performing. Not only did I have the privilege of producing this album, but I also got a chance to know the band better. I’m impressed with how much they bring out the best in each other.”

The band takes their name from the mile marker that sits at Boston’s southern border on route 93, the city’s main artery. It’s a road sign they’ve passed countless times while heading out on tour. Through an active social media audience and radio support from terrestrial stations and Sirius XM, the band has found receptive audiences across the globe, touring all over North America as well as Ireland, Australia, New Zealand, and Japan.

Asked about the band’s influences, Murphy cites Alison Krauss & Union Station for their precise arrangements and execution, the Del McCoury Band for their grit and groove, and the Punch Brothers for their genre-bending virtuosity. As for writing, Murphy praises the mastery of Gillian Welch and Jason Isbell for their ability to tell a fully-realized story within the confines of a three-minute song.

These influences shine through in Mile Twelve performances.  but at the core of their music is a representation of the band’s emerging voice. “We decided to record City on a Hillas live and authentically as possible,” Murphy says. “There was no metronome, no filler material, no smoke and mirrors. It was very real, you know? We all feel that the end result is an honest statement of who we are.”

An optional pre-concert fixed price dinner will be served at 6 PM.  Tickets and more information on the concert and the dinner can be obtained by calling the White Gull Inn at (920) 868-3517 or accessing the inn’s website, www.whitegullinn.com.  If still available, concert tickets can be purchased at the door, although many concerts sell out, so advance ticket purchase and reservations for the pre-concert dinners are recommended.