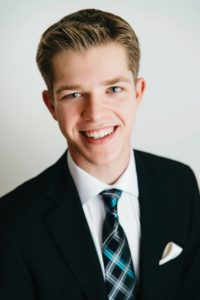 Jacob Beranek, Composer-in-Residence for Midsummer’s Music of Door County, will have his Partita Melodica performed by Milwaukee Musaik at 7:00 pm on Monday, November 5, at the Wisconsin Conservatory of Music.

English Horn Player Margaret Butler, a member of the Milwaukee Symphony and the Midsummer’s Music ensemble, played the premiere performances and will also be featured in the Milwaukee Musaik performance. Beranek wrote the work with Butler in mind. The original version included violin, viola, cello, and double bass. For the Musaik performance, Beranek expanded the string section so that the work can be played by English horn and a small string orchestra.

“This is a first-rate work, and it was very well received by our audiences,” said Jim Berkenstock, Artistic Director for Midsummer’s Music. “It is great to see the work being performed in other venues. It deserves to be heard often,” added Berkenstock.

Midsummer’s Music began its Composer-in-Residence program in 2017 when it selected Jacob Beranek to write a work for the 2017 season with funding from the MMG Foundation. Beranek is a sophomore composition major at Vanderbilt University who is already having his works performed in several different countries.

Midsummer’s Music has performed four different works by the young composer who hails from Oconomowoc, WI, but spends some of his summer in Egg Harbor with his parents.

“I am so thrilled that this work is receiving recognition outside of Door County,” said Beranek. “It would not be possible without the original commitment of Midsummer’s Music and its musicians including the outstanding artistry of Margaret Butler.”

Tickets are available at the door an online at Eventbrite. Search for “Musaik” and the concert is titled “Trick or Treat.”

Midsummer’s Music was co-founded in 1990 by Jim and Jean Berkenstock, long-time Door County summer residents and, until retirement, principal orchestral players with the Lyric Opera of Chicago. The Festival has drawn on the extraordinary talent of professional musicians and artist/faculty of universities throughout the Midwest. Offering chamber music for winds, strings, and piano performed in intimate settings throughout Door County, venues include art galleries, churches, and private homes. From such masters as Mozart, Schubert, and Dvořák to some lesser-known but very accomplished composers, each concert is an unforgettable musical experience.