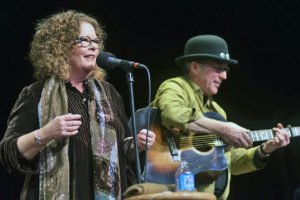 Mollie O’Brien and Rich Moore will be featured at the first concert scheduled in the 35th season of winter folk concerts at the White Gull Inn in Fish Creek on Wednesday, November 7. Tickets for the 8 pm concert are $22.

Mollie O’Brien is an Americana, bluegrass, R&B, and folk singer from Wheeling, West Virginia. She has released a number of Americana albums with her brother, Grammy-winner Tim O’Brien. She has also released five solo albums. She is currently based in Denver, and regularly tours and performs with her husband, guitarist Rich Moore, as a duo. Together they have released one studio album, Saints and Sinners and a live CD, 900 Baseline.

O’Brien has regularly appeared on shows such as A Prairie Home Companion, Mountain Stage, and contributed vocals to the Grammy-winning album True Life Blues: The Songs of Bill Monroe. She is known for her interpretations of classic songs by artists such as Tom Waits, Memphis Minnie, Willie Dixon, Chuck Berry, Si Kahn, Terence Trent D’Arby, and Kate MacLeod.

Mollie O’Brien and her husband, guitarist Rich Moore, have for nearly 30 years quietly made it their mission to find, mine and reinvent other artists’ songs. They are geniuses at the craft of interpretation in the way that great singers, since the beginning of popular American music, have made the songs of their era their own. As songwriters they add their own tunes to the canon of American roots music they inhabit and show us they’re completely at home with their musical selves. Grammy winner Mollie has long been known as a singer who doesn’t recognize a lot of musical boundaries, and audiences love her fluid ability to make herself at home in any genre while never sacrificing the essence of the song she tackles. She is a singer at the very top of her game who’s not afraid to take risks both vocally and in the material she chooses. Rich, while known to produce some of the funniest onstage running commentary, is also a powerhouse guitar player who can keep up with O’Brien’s twists and turns from blues to traditional folk to jazz to rock and roll. He creates a band with just his guitar and, as a result, theirs is an equal partnership.

The White Gull Inn series debuted in 1984 with monthly concerts November through April. According to White Gull Innkeeper Andy Coulson, the early Inn performances were roughly designed after house concerts, which are usually held in the home of someone who provides lodging, dinner and breakfast and takes up a collection at the door for the artist. Although not technically a house, The White Gull had the rooms and the meals, Coulson said. Before long, the series gained popularity and began attracting in artists such as Tom Paxton, Bob Gibson and John McCuen. “It took a while, but the artists who came the first few years liked being here in winter and spread the word,” Coulson said. Nearly 200 musicians have performed at the inn during the 34 seasons. Artists in the series who have either won or been nominated for Grammys include Mollie O’Brien, John McCuen, John McCutcheon, Tom Paxton, the Special Consensus, Robbie Fulks and Claire Lynch.

Tickets and more information on the concerts and the optional dinners can be obtained by calling the White Gull Inn at (920) 868-3517 or accessing the inn’s website, www.whitegullinn.com. If still available, concert tickets can be purchased at the door, although many concerts sell out, so advance ticket purchase and reservations for the pre-concert dinners are recommended.