Door Shakespeare is pleased to announce the appointment of Amy Ensign as its new Managing Director.

Ms. Ensign has over thirty years of experience in theatre, instructional design, retail sales, training, and marketing. After graduating from the University of Washington with a BA in Drama, Amy began work as a trainer for the naturally based skin and hair care company, The Body Shop. She quickly grew to become the Northwest Regional Training Manager, opening over 25 shops in the course of two years and launching over 10 new product lines. Ensign also developed the training program and support materials used for the first exclusive US product launch for the UK based company.

Amy met her husband, David Foulds, while working in San Francisco as a Club Manager for the highest rated sailing school in the country, OCSC Sailing (Practical Sailing magazine). After taking 10 years off to sail the Coasts of North and Central America, Amy and David settled in Door County to raise a family. The rich arts community rekindled her interest in theatre.

Ensign began her career with Door Shakespeare 11 years ago as a member of the Acting Company (Elmire in Tartuffe, Ceres in The Tempest). Other Door Shakespeare credits include Portia in The Merchant of Venice, Julia in The Rivals, Jane in Pride and Prejudice, and Rosalind in As You Like It. Over her six years with the company, Ensign’s roles for Door Shakespeare grew to include Choreographer, Company Manager, and Education Director. At that time, she initiated Shakespeare in the Schools, one of the educational arms of Door Shakespeare.

Other Door County acting credits include TAP (Shirley Valentine, The 39 Steps, Steel Magnolias), Northern Sky Theater (The Spitfire Grill), Teatro Caravaggio (The Belle of Amherst), Theatre M (A Bed Among the Lentils), and The Peninsula Players (A Trip to Bountiful, Almost Maine).

Amy returns to Door Shakespeare after two and a half years as the Marketing and Development Director for Third Avenue Playhouse (TAP) where she also directed (Love, Loss, and What I Wore, The Best Christmas Pageant Ever, Ken Ludwig’s Twas the Night Before Christmas) and coordinated their education department.

“I am thrilled to return to my Door County theatre roots.” After a recent trip down memory lane, touring the backstage areas of Door Shakespeare’s performance space in the garden of Bjorklunden, Amy remembers, “I hung my water bottle on this branch, paced this path while waiting for an entrance, stepped over that root every night! I am excited to join Producing Artistic Director Michael Stebbins as part of the Door Shakespeare leadership team.” 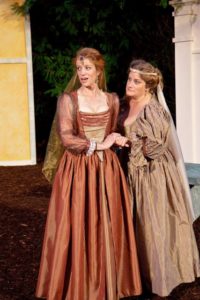 Amy Ensign and Suzanne Graff in The Merchant of Venice (2009), Photo by Rick Spalding

The theatre director at Sevastopol School (Fools, You Can‘t Take it With You, A Midsummer Night’s Dream, Smash, Annie, Big Fish, You’re a Good Man Charlie Brown, among others), Ensignwill continue to direct their shows while working for Door Shakespeare. “Door Shakespeare is very supportive of my work in Door County schools. One of our goals for this year is to offer curriculum support through our Shakespeare in the Schools program. We can offer a unique perspective into how a production company approaches the text.”

Ensign is also looking forward to Door Shakespeare’s newly renamed Camp Will. The week-long theatre workshop gives actors from 7 years old through high school the opportunity to voice their opinions, communicate their thoughts, and discover the poetry of Shakespeare all within the idyllic atmosphere of Door Shakespeare’s performance space in the Garden of Bjorklunden, just south of Baileys Harbor. “My son held his first [pretend] sword during the Door Shakespeare summer camp in 2008 and I can’t wait to see him and the other campers having fun.”

When not in the theatre, Amy enjoys cycling, yoga, and playing underwater hockey at the Sturgeon Bay Y. She lives in Sturgeon Bay with her husband and son.

Door Shakespeare is a resident summer theatre company performing relevant and entertaining productions of the works of William Shakespeare and other classical playwrights through artistic excellence in both the conception and performance of their plays. Door Shakespeare enhances the theatrical experience through interactive educational opportunities designed for audiences of all ages, thereby creating a common ground to experience these celebrated traditions.
The 2018 season features two William Shakespeare productions: Much Ado About Nothing, directed by Joseph Hanreddy and The Comedy of Errors, directed by Leda Hoffman. The shows are presented on alternate nights, Monday through Friday at 7:30 and Saturday at 5:00 in the garden of Bjorklunden just south of Baileys Harbor on Highway 57.
For more information call 920.839.1500, go to www.doorshakespeare.com, or visit their office in downtown Baileys Harbor.