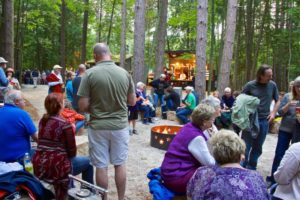 Northern Sky Theater announced the continuation of their post-show fireside gatherings in Peninsula State Park in Fish Creek this summer with the addition of special guests and extra evenings in the week.

“We call it our Post Show After Glow ‘Gatherings’  because it’s not really a concert and it’s not really a ‘talk-back’,” stated Holly Feldman, Director of Development and Public Relations. “It’s just a chance to share in story and song around our fire ring and gives our patrons the opportunity to get up-close and personal with our cast and company members.”

“Sharing stories around a fire is really where all story-telling began and it is certainly a tradition that has always been a part of Northern Sky’s roots,” added Doc Heide, Playwright and Artistic Advisor.

The fire ring gathering space was installed in 2015 with support from The Cordon Family Foundation, The Raibrook Foundation, and Jason Feldman Landscapes.

The company began using the fire ring more regularly in 2016 with the help of volunteers to tend the fire and company members making themselves available to tell a few jokes, sing a few songs and take questions from the audience.

This year, with support from Nicolet National Bank, company members Alex Campea, Fred ‘Doc’ Heide, Chase Stoeger and Molly Rhode will be on-hand to share their many talents.

“In addition, this year we’ll be adding some special guests,” stated Molly Rhode, Associate Artistic Director. “The talented musicians from Birch Creek will be joining us on select Mondays between our 6pm and 8:30pm performances.”

“This is the kind of thing we know people love about Northern Sky, that we’re accessible as performers and that many of them consider us family,” added Rhode.

Weather permitting, the Post Show After Glow gatherings will take place after evening performances on Tuesdays, Wednesdays, and Fridays and between shows on Mondays and Thursdays. There is no additional charge. The gatherings typically last about a 1/2 hour to 45 minutes in length.

If you’d like to volunteer to tend the fire at Northern Sky, contact Ann Birnschein, Volunteer Coordinator at 920-854-6117 x104 or email ann@northernskytheater.com.