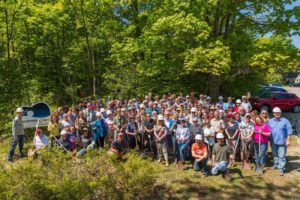 On Sunday, May 27th, Northern Sky’s company members, capital campaign donors and board of directors gathered to officially break ground on the company’s new campus on the corner of A & F in Fish Creek.

In 2017, Northern Sky embarked on the public phase of its “Constellation Campaign” with the hope of breaking ground on its new property in the spring of 2018.

“The response has been tremendous. We hit all of our benchmark goals over the winter, allowing us to begin work this spring on the production and storage facility that will be part of the two-building campus located at the corner of County Highways A&F,” stated Dave Maier, Managing Director.

The second building, the creative center, will house administrative offices and a 250-seat theater. The company plans to open the theater with a premiere show for the 2019 fall season.

John Sawyer and Craig Coursin of Door County’s Carlson Erickson Builders are the lead contractors on the project and are working closely with building committee chair Tim Stone and the architectural firm of Strang, Inc.

“The success of the campaign is highly encouraging, of course, but we have not crossed the finish line yet,” stated Holly Feldman, Director of Development and Public Relations. “We still need to raise a significant amount of money to complete everything we are determined to accomplish, including much-needed upgrades at our home in Peninsula State Park.”

While the creative campus will allow the company to consolidate many of its operations under one roof and provide for a year-round presence, the company plans to continue to perform its summer season in Peninsula State Park.

“We’ve had a remarkable 47-year partnership with the Wisconsin State Park system,” stated Mary Seeberg, Board Chair. “In 2016, Northern Sky and the Wisconsin Dept. of Natural Resources renewed this partnership for fifteen years, effectively securing our home in the park for the next generation of theatergoers.”

“Since building our new stage and adding dressing rooms and path lighting in 2001, we’ve done everything we can to make further needed improvements at the park by adding small enhancements. But many of our interim solutions to various problems have surpassed their life expectancy,” added Maier. “With a few strategic tweaks and renovations, we can make some dramatic improvements to the overall Northern Sky experience that will impact the quality of that experience without changing what people love most about our theater under the stars.”

“The completion of the Constellation Campaign is critical in ensuring the continued success of Northern Sky,” stated Jeff Herbst, Artistic Director. “We are now at a critical moment in our development. The new campus and the improvements at the park will strengthen each other, giving us long-term sustainability. The future at Northern Sky is as promising as ever.”

Naming opportunities remain at both the new campus and at the amphitheater in Peninsula State Park.