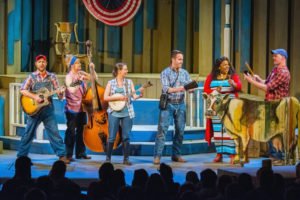 Northern Sky will be premiering a new musical next summer and offering a 2018 summer hit along with a classic.

We Like It Where?, written by Corrie Beula Kovacs and Stephen Kovacs, celebrates ordinary people doing extraordinary things. It is based on the true “mouse that roared” story of the town of Winneconne’s brief secession from Wisconsin. The tourist-dependent town is left off the 1967 state highway map, and the locals take action. They come up with a clever publicity stunt, uniting their community and making world news in the process.

The husband and wife writing team has been hard at work researching Winneconne’s  history. “Perhaps our most rewarding research has been done with the two living characters from our show, Jan and Russ Meerdink of Neenah,” adds Beula Kovacs. “They’ve provided us with a first-person look at the events that took place more than 50 years ago.”

Back by popular demand for a second summer, Dairy Heirs, written by Eva Nimmer, Joel Kopischke, and Alissa Rhode. It is a “modern-day family farming moo-sical” full of cheesy puns and singing sibling duos. 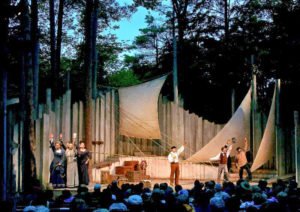 Windjammers makes its second voyage to the stage since its premiere in 2013. Written by Robin Share and Clay Zambo, the story is inspired by the yarns and shanty tunes of 19th century Great Lakes sailors. Windjammers is a coming of age tale of courage and adventure amid high waves, fresh air, legend, and song.

The fall season features a world premiere musical in Northern Sky’s new Creative Center with an extended run through the end of October.

Dad’s Season Tickets, written by Matt Zembrowski, is a nostalgic musical celebration of family, folly and the Green Bay Packers. Frank Kosinski’s three grown daughters learn that one of them will inherit Dad’s treasured Packer season tickets. Old rivalries surface as the sisters try to prove who is most deserving. The sisters soon learn that family isn’t everything; it’s the only thing.

Northern Sky’s Summer Season runs from June 12th – August 24th at the Peninsula State Park Amphitheater in Fish Creek, WI. A park sticker is not required to attend performances in the State Park.

The company’s fall season will be held indoors at Northern Sky’s new Creative Campus on the corner of County Roads A & F in Fish Creek from August 30th – October 26th.

Tickets will go on sale March 1st in the Northern Sky box office at the Green Gables shops in north Ephraim, via phone at (920) 854-6117, and online at www.NorthernSkyTheater.com