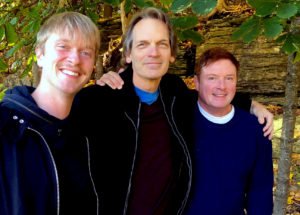 Door County’s award-winning Northern Sky Theater has announced the line-up for its annual holiday concert at the Old Gibraltar Town Hall. Home for the Holidays will offer the opportunity to reunite with Northern Sky favorite Jeff Herbst and his friends Ryan Cappleman and Tom Donoghue for an uplifting evening of intimate seasonal songs and delightful holiday humor.

The all-new concert for 2018 will play for five performances from December 28th through December 31st. This will be Northern Sky’s final Home for the Holidays at the town hall before they move to their new campus over the next year.

One of Door County’s favorite actors, Jeff Herbst, has been with Northern Sky since 1991 and became Artistic Director in 1993. He began his collaboration with the Heritage Ensemble, Northern Sky’s predecessor, in 1985 as part of the Governor Dodge State Park troupe and then migrated north to direct for the Peninsula State Park group in 1988 and 1989. He has worked on over sixty original productions with Northern Sky, including Guys on Ice, Lumberjacks in Love, Packer Fans from Outer Space, and Bone Dance. Jeff has an MFA in Acting from the Asolo Conservatory and has performed on and off Broadway, as well as at regional theaters throughout the United States. Jeff first appeared on the Gibraltar Town Hall stage in 1992 with Fred Alley and Karen Mal in the premiere Northern Sky fall season. He and Fred Alley were honored with the Distinguished Alumni Award from their Alma Mater, Mt. Horeb High School, for their work in creating original musical theater.

Milwaukee-based performer, choreographer, music director, and teaching artist, Ryan Cappleman, returns to Northern Sky after music directing Guys & Does and appearing as the Space Bear General in the Milwaukee cast of Packer Fans From Outer Space. He just finished Billy Bishop Goes to Warat Third Avenue Playhouse (TAP), and choreographing Hairspray at the Skylight Music Theatre, where he is the Resident Education Music Director. He is a two time Footlights Award Winner for Outstanding Choreography and has a shelf full of Jerry Awards (celebrating excellence in High School level musical theater) for Outstanding Choreography, Music Direction, and Direction.

Jeff’s friend from their early careers in New York, Tom Donoghue, currently produces benefit concerts while continuing to write songs, screenplays and musicals in New York. He and Jeff first appeared together in an original Off-Broadway show. Tom went on to play Marius in Les Miserables on Broadway and on the Broadway National Tour. He toured with Michael Crawford as a featured singer in The Music of Andrew Lloyd Webber at Radio City Music Hall and on the national/international tour. Regionally, he starred in Big River, Joseph and the Amazing Technicolor Dreamcoat, 1776, and others. He appeared on Late Night with David Letterman and, recently, sang the National Anthem at Madison Square Garden for the Eastern Division Basketball Finals. Tom is a singer/songwriter and recorded for Clive Davis and J Records.

Tickets can be purchased online at www.NorthernSkyTheater.com, at the Northern Sky box office at the Green Gables shops in north Ephraim or via phone at (920) 854-6117. Office hours are 10am to 4pm Monday through Friday.

Performances of Home for the Holidays are scheduled for 4pm on December 29th, 30th and 31st plus 7pm on December 28th & 29th. Tickets are $24 for adults and $14 for students age 17 and under. All seats are General Admission. Any remaining tickets will be sold at Gibraltar Town Hall beginning 45 minutes before each performance. As a special holiday treat, each show will also feature a drawing for gift certificates from local businesses.