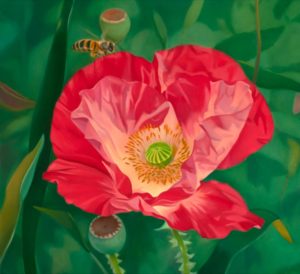 Peninsula School of Art’s (PenArt) newest exhibition Magic Landscapes: Contemporary Landscape Painting opens May 24th and runs through July 13th, 2019 at PenArt’s Guenzel Gallery, 3900 County Road F, Fish Creek, Wisconsin. The exhibition feature works by seven nationally recognized artists – many with ties to Wisconsin. Drawing on the aesthetics of the Magic Realism movement of the mid 20th century, these artists offer unique interpretations of the landscape. There are elements of the unknown, the unexplained, and the mysterious embedded in the works. It is a world we recognize – only slightly skewed.

The art critic Franz Roh first coined the term Magic Realism in 1925. His use of “magic” did not necessarily refer to a fantastic realm but rather the wonder inherent in ordinary and every day. He spoke of a “renewed delight in real objects.”  In 1942, the Museum of Modern Art in New York showcased Magic Realism in the exhibition American Realists and Magic Realists. It featured works by a variety of artists, including Ivan Albright, Peter Blume, Edward Hopper, and Andrew Wyeth, who was just beginning his career. The museum issued a press release explaining that “Magic Realists try to convince us that extraordinary things are possible simply by painting them as if they existed.”

As an art movement Magic Realism acted as a portal to Surrealism, and later Contemporary Realism. But unlike the Surrealists, artists from the Magic Realism movement did not probe the unconscious or dreams, They emphasized the innate strangeness of the typical and every day. Friday Kahlo once said: “I never paint dreams or nightmares. I paint my own reality.”

According to Catherine Hoke, Peninsula School of Art Executive Director, “The possibilities of Magic Realism’s inherent mysteriousness, its underlying narrative qualities, and its basis in everyday experience make it influential across a diverse range of contemporary artists, painters and photographers alike, who use the vocabulary and devices in unique ways.”

In her painting Poppy IV, Magic Landscapes artist, Beth Edwards of Tennessee, transforms otherwise inconsequential bits of flowers and folliage into dramatic views of nature by altering and exaggerating the scale of a single poppy to several times life size. Breehan James, a Wisconsin native, paints specific locations she has explored at her family’s northern Wisconsin cabin and in the Boundary Waters of Minnesota. Rugged boreal forests, beautiful night skies reflected in lakes, deer hunters, and cottages in the woods populate her paintings and evoke a psychological state of being both lost and found in nature.

While, Amy Talluto’s oil and gauche landscape paintings navigate the real and imagined. They describe scenes that are sometimes bright, lush and flowering, or sometimes dissonant, murky and foreboding.

Also featured in the exhibition is 2019 PenArt faculty member Shannon Estlund of Minnesota. Estlund starts with photographs of places that are in nature, but are easily accessible, such as urban and suburban areas. “I’m less interested in grand vistas and more interested in areas on the side of a highway or overgrown driveways that you might pass by often and can easily get into,” she says. The photograph helps her map out the painting, figuring out where the light and dark areas are. Then, she infuses the painting with her imagination, emphasizing something specific about the subject. “I don’t use the same technique every time,” she say. “I like to have the place dictate the way the paint is applied.” Other featured artists include Zoe Hawk (MO), Misha Kligman (KS), and Michael Kruger (KS).

Magic Landscapes is free and open to the public Monday through Saturday, 8am to 5pm.