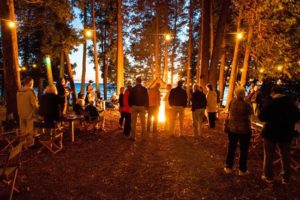 “On the heels of having successfully completed our 82nd season, I’m very happy to announce next year’s 2018 season,” said Artistic Director Greg Vinkler.  “People sometimes ask me if I plan seasons around a theme. The answer is no, I don’t. The only things that connect these shows are variety and entertainment – plus they’re all shows about which I care a great deal. And I find that feeling that way about a slate of shows makes my job and everyone else’s much easier and much more fun!”

“Now and Then” (June 12-July 1) opens the Peninsula Players 83rd season. “One of the most satisfying things I’ve been able to do at Peninsula Players is to help a playwright bring his or her creation into the world. I couldn’t be happier seeing a brand new play launched from our stage,” Vinkler said.

Two of playwright Sean Grennan’s plays, “Making God Laugh” (2011) and “The Tin Woman” (2014), made their world premieres at Peninsula Players and have gone on to have very full lives elsewhere. There have been more than 85 productions of “Making God Laugh” all over the United States, Canada and Latvia. “The Tin Woman” has been produced more than 32 times around the U.S. since it premiered and was produced in England last month.

“I’m very happy for Sean and for the audiences that have enjoyed these wonderful pieces,” Vinkler said. “For our first show of the 2018 season, we are very lucky to be presenting the world première of Sean’s most recent play, ‘Now and Then.’

“We’re in an Irish ‘neighborhood’ bar in 1981. Jamie, the young bartender, is closing up for the night when an older gentleman, who seems to know the bar very well, enters. They engage in a friendly conversation. Then Jamie’s girlfriend Abby comes in, and before you know it, the gentleman offers each of them a thousand dollars if they’ll sit and talk with him for just an hour. After some persuasion, they agree. And then he tells them an unbelievable story. It’s a story of romance, aspirations and life, told with a huge amount of love and humor. It’s hard to tell you much more than that without giving things away. But I will tell you that when I first read it, I immediately got on the phone to Sean and told him how much I loved it. I know our audiences will too!”

“Miss Holmes” (July 4 – July 22). A new play by Christopher M. Walsh. Based on characters by Sir Arthur Conan Doyle. In this murder mystery with a twist, Walsh’s Sherlock Holmes and Doctor Watson are intelligent, independent woman in 19th Century England, a time when society did not value those attributes. Social class distinctions were explicitly set and the rebellion of these social norms was not tolerated.

“I directed a reading of ‘Miss Holmes’ for the Peninsula Players winter play reading program, The Play’s the Thing, at Björklunden earlier this year,” Vinkler said.  “At the end of the reading, I asked the audience if they’d like to see it on our stage and they unanimously and enthusiastically said ‘YES!!”

Neither woman abides by the conventions of the times. Instead, they forego domestic accomplishments in the pursuit of helping other women in peril. Trapped in an era that refuses to accept them, these unconventional women work together to uncover the secrets surrounding the past of a corrupt Scotland Yard investigator whose previous two wives turned up dead.

“While it’s a brand-new play, Chris Walsh does a wonderful job of recreating the style and world of Conan Doyle’s stories with a new and extremely challenging take on those stories,” Vinkler said. “Miss Holmes possesses one of the greatest deductive minds of her generation, and Dr. Dorothy Watson struggles to make a difference at the only hospital in London that will hire female doctors. Their work on those mysterious deaths is made even more difficult by a rigid Victorian society that does not condone two women who challenge the societal norms of their day. This new take on the genre is ‘cunning and highly enjoyable,’ ‘wildly winning,’ and is a must-see for all Baker Street Irregulars. I’m an avid Sherlock Holmes fan and I’m crazy for this piece!”

“The Drowsy Chaperone” (July 25 – August 12). A delightfully smart and merry Jazz Age musical with show-stopping song and dance numbers by Lisa Lambert, Don McKellar, Bob Martin and Greg Morrison. “This loving send-up of the Jazz Age musical features one show-stopping song and dance number after another,” Vinkler said. “The show begins with the houselights down. A man in a chair appears on stage and puts on his favorite record: the cast recording of a fictitious 1928 musical. Voilà, ‘The Drowsy Chaperone’ begins as the man in the chair looks on and the musical comes to life onstage in his apartment. With a young couple on the eve of their wedding, a harried best man, a Broadway impresario, an absent-minded dowager, two gangsters posing as pastry chefs, a ditzy chorus girl, a very misguided Don Juan and a tipsy chaperone, you have the ingredients for an evening of absolute fun. It’s delightful and sparkling, and audiences will be over the moon about it!” “The Drowsy Chaperone” is the winner of five Tony Awards, including Best Book and Best Original Score, and seven Drama Desk Awards.

“Living on Love” (August 15 to September 2). A sparkling new romantic comedy by two-time Tony Award winner Joe DiPietro, based on the play Peccadillo by Garson Kanin.   “Living On Love” is set in a glorious Manhattan penthouse in 1957, which is home to a high-strung and long-married couple. “Raquel DeAngelis, La Diva, is a prominent opera soprano who is no longer as much in demand as she used to be, and Vito is a vibrant tempestuous conductor who boasts of romantic conquests and bristles anytime Leonard Bernstein’s name is mentioned. Vito is writing his memoir with ghostwriter Robert, a young man with literary ambitions,” Vinkler said. “Raquel, in a competitive moment, lures the young man away to write her memoir and Vito moves on to use buttoned-up Iris, whom he hopes to seduce. The music-infused plot line is silly and fun, and the set and costumes will be gorgeous. And the end is all about, well, love!”

“Salvage” (September 5 to October 14). An intriguing drama by Joseph Zettelmaier. “Our final show of the 2018 season is a 90-minute two-hander,” Vinkler said. “I told Joe I didn’t know how to characterize ‘Salvage’ and said I guess I would call it a romantic-comedy-mystery-drama, and he laughed and said that’s exactly how he has described it himself to others. Actually, I like that it’s hard to define – unique pieces are like that.

“’Salvage’ takes place recently in a collectibles shop in a large city. Jason, who runs it, is a geek for movie monster models and old lunch boxes, but his beloved shop is facing foreclosure. Enter Sarah, a young, reserved, professional-looking woman who has brought in some sports memorabilia to have appraised. What happens after that is romantic, funny and dangerous. As one reviewer said: ‘It twists like a corkscrew.’ It is truly engrossing.”

“Salvage” was also part of the winter play reading series this year at Björklunden and once again the audience encouraged Vinkler to produce a full production. “I’m really glad they were as enthralled with the play as I am,” Vinkler said.

The Peninsula Players performs Tuesdays through Saturdays at 8 p.m. and Sundays at 7:30 p.m. in the summer. With the opening of “Salvage,” Sept. 5 curtain times shift to Tuesday through most Sundays at 7 p.m. The closing Sunday performance of each summer show will have a 4 p.m. matinee, the autumn a 3 p.m. matinee. Additional autumn matinees will be announced in May of 2018.

More information on the 2018 season will be forthcoming in the new year Vinkler said. The creative teams and casts will be selected from regional talent pools and will be announced at a later date. Peninsula Players is a professional not-for-profit theater that collaborates with members of Actors’ Equity Association (AEA), the union of professional actors and stage managers; United Scenic Artists (USA), a labor union and professional association of Designers, Artists and Craftspeople; and the Stage Directors and Choreographers Society (SDC), a theatrical union of stage directors and choreographers.