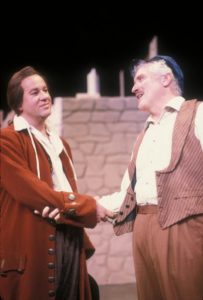 Apparitions, a Door County themed play, was commissioned and premiered at Peninsula Players in 1995. Pictured are actors William Brown as French explorer Robert La Salle and Howard Platt as the clairvoyant Roy Thorp in the 1995 production. Photo by Bruce Mielke.

Peninsula Players Theatre presents a reading of Kristine Thatcher’s Apparitions. Thatcher was commissioned by the Peninsula Players in the mid-1990s to write a play using Door County’s history and unique character as its major influence. Apparitions will be performed February 4 at 7 p.m. at Björklunden, located at 7590 Boynton Lane, Baileys Harbor. Apparitions is produced with support from and in coordination with Door County Reads and its exploration of its book selections The Death and Life of the Great Lakes by Dan Egan and Wintering by Peter Geye. Admission is free.

Thatcher, an award-winning playwright, performed in the Players productions of The Tin Woman and And Then There Were None and directed Over the Tavern and Miracle on South Division Street.

Apparitions, which made its world première in 1995 at Peninsula Players, centers on some well-known and lesser-known stories of Death’s Door, including early Door County explorers and settlers such as Roy Thorp, Kee-wau-nay, a Potawatomi Indian, Robert Noble, Joseph Judson Lobdell, Mrs. Dalbert (Eva) Ranney, Coyren Kealiher and Rene-Robert Cavelier, Sieur de La Salle. These seven characters tell their often grim stories and help bring some of Door County’s history and legends to life.

One should not underestimate the power of Mother Nature around Plum and Washington Islands. If you do, perilous situations arise – a ship goes down in the treacherous waters, people break through the ice – and harsh games of life and death result.

In Apparitions it is when these precarious moments occur that the Guardians of the Door, as Thatcher calls them, gather to help those who find themselves in dire peril near Death’s Door. Apparitions visits moments in Door County’s history when some people were tested with severe hardships, and either survived and went on to live productive lives here – or didn’t.

Cast in the reading of Apparitions are Peninsula Players veteran actors Cassandra Bissell (Miss Holmes, Around the World in 80 Days); Neil Brookshire (Miss Holmes, The 39 Steps), Mark Moede (The Full Monty, And Then There Were None); Noah Simon (A Trick of the Light, Once a Ponzi Time); Barbara Simpson Fuhrmann (The Trip to Bountiful, Waiting for Tina Myer); Larry “Thor” Thoreson (Population 485); and newcomers Sam Hubbard, David Stobbe and Matthew C. Yee.

Simon, a veteran Chicago performer who has worked with such companies as Goodman Theatre, Shattered Globe, Strawdog, Remy Bumppo and Red Twist, is cast as the well-meaning Coyren Kealiher.

Hubbard’s credits include The Book of Will with Northlight Theatre and Cymbeline and Neighborhood 3 with Strawdog Theatre. Stobbeperformed as Rosencrantz in Rosencrantz and Guildenstern are Dead for Metropolis Theater. His additional credits include Bad Date for Stage Left’s Leap-fest and New Faces Sing Broadway 1969 with Porchlight.

Fuhrmann portrayed another of Thatcher’s historical characters, Wisconsin poet Lorine Niedecker, at Milwaukee Rep as well as in the Players reading of Thatcher’s Niedecker. Thatcher’s writing credits also include Voice of Good Hope, a glimpse into Barbara Charline Jordan’s life as the first black woman elected to the Texas Senate.

Thatcher’s Emma’s Child, a play about the adoption of a newborn who is born with congenital disabilities, received the 1995 Susan Smith Blackburn Prize, the 1997 After Dark Award, the 1997 Resolve Award for Excellence in the Arts, the 1997 Cunningham Prize, and a 1997 Illinois Fellowship for Playwriting.

The Wilde Awards honored Thatcher with the Council Cargle Award for dedication to the Michigan theatre community in 2015. The Wilde Awards were named after Oscar Wilde and is Michigan’s version of the Tony award.

The 2019 season of The Play’s the Thing also includes Tales of Men and Ghosts adapted by Steve Pickering from stories by Edith Wharton, which will be performed Monday, March 4, and Love, the Cracksman, a new fast-paced comedy by Mark Brown on Monday, April 1.

The Play’s the Thing is funded in part by a grant from the Wisconsin Arts Board with funds from the State of Wisconsin, as well as generous grants from Door County Medical Center and Friends of Door County Libraries.

Door County Reads is in its ninth year, having grown out of the Library/Players partnership to bring The Big Read to Door County for three years. A full listing of events is available at www.doorcountyreads.org.