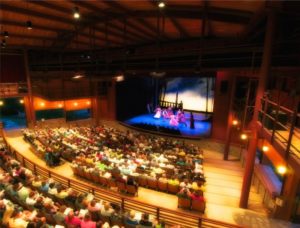 Hearing loops help make the theater more accessible for people with hearing loss. The installation in October was made possible through gifts from The Dwight and Linda Davis Foundation, Jeannie and Ed James, Wayne and Cleta Semmerling and Stan and Jane Whiteman and a grant from The Raibrook Foundation. The hearing loop is additional technology Peninsula Players now has available on the main floor of its audience pavilion.

Significant decreases in the cost of the equipment and installation since 2006, which was when the theater was re-built, gave the theater an opportunity to improve its listening assistance system. Peninsula Players joins a select number of public venues, theaters and places of worship across the county to aid those with impaired hearing with this technology. More than 1,000 public venues are using the loop system in Wisconsin according to HearingLoop.org.

The hearing loop benefits the hearing impaired by interacting with individuals’ telecoil (T-coil) device to provide a heightened sense of hearing, thus eliminating the need for headphones for those with the T-coil.  Additional advantages of the hearing loop system includes limited maintenance, the ability to service an unlimited number of users, and no interference with other hearing aids that lack the T-coil.

“We are pleased to provide this technology to the Door County arts community,” said Managing Director Brian Kelsey. “The installation of the hearing induction loop affords individuals with impaired hearing the opportunity to actively engage with our theatrical productions. We are proud to complete such an important project which enhances the quality of life for our audience members and the Door County community.

Signage announcing the new hearing induction loop technology went on display at Peninsula Players during the final week of its 83rd season in October. Volunteers and staff explained its usage to patrons as well as what the new image on display signified. “Initial feedback from patrons was very positive for the new system,” Kelsey said. “One patron wrote to share how excited he was to hear every performer’s words so clearly since the installation of the loop.”

Nationally, all too often people with hearing loss, and consequently their partners and family members, have diminished their attendance at public venues and theaters. “Why bother attending plays if you can’t understand what is being said on stage?” said Juliëtte Sterkens, an audiologist with the Hearing Loss Association of America and an outspoken advocate for the loop technology in Wisconsin.   “In a loop, the people with hearing aids are in effect offered a seat right on stage, and what is not to like about that?” she laughs.  The hearing loop broadcasts voices from the actors wirelessly to users of hearing aids, cochlear implants or portable devices while eliminating background noise.

Stan Whiteman discovered the loop system about 15 years ago when his wife, Jane, acquired hearing aids. They installed a hearing loop system into their home for the television, and they fell in love with it. “We started talking to other Door County organizations about the hearing loop and how it would be of value,” Stan said. “It has become a passion of ours to help others to enjoy Door County’s various venues.”

The loop technology magnetically transmits sound to hearing aids, cochlear implants with T-coils and portable devices which receive speech in a clear, crisp manner. In its simplest form, an induction loop system uses a copper wire, installed around the perimeter of a room, and connected to an amplifier to create a magnetic signal. The T-coil, a small coil of wire inside a hearing aid or device, then receives the signal.

“Users of loops report dramatic improvement in clarity and much greater ease of listening in hearing loops,” Sterkens said.  “All hearing aid users need to do is push a button on their hearing aid to activate a T-coil.”

Patrons to Peninsula Players will notice ‘black tape’ around the seating areas on the main floor of the audience pavilion next season.

“Under that ‘tape’ are the copper wires of the loop system,” Kelsey said.  “When one stands or sits within its boundaries, they are ‘in-the-loop’ and have access to the technology.  Once they step outside the loop, such as to go use the restroom or enjoy our Beer Garden, access to the hearing system disengages. The loop was not installed in the balcony primarily because it is designated for overflow seating only. We only open the balcony when the main floor reaches capacity in the summer, which is about 14 performances per season. Patrons can still check-out hearing-assistance receivers for use in the balcony.”

Patrons of the Peninsula Players should check with their audiologist and have this feature activated.   No hearing aids? No problem! For those who don’t own hearing aids, or whose devices are not so equipped, the theater will continue to offer headset devices available at the Canteen. iPhone users may want to look into LoopBuds, earphones that sport the T-coil and by downloading a free app.

“I can tell you that I hear better in a loop!” said Sterkens, “And my hearing loss is minimal. I highly recommend everyone tries!”

Peninsula Players and its artistic company have been entertaining and exciting audiences with a variety of works including dramas, mysteries, comedies and musicals. The 84th season will open June 18 and run through October 20, 2019.

If you are interested in learning more about hearing loops and locations of looped places in Wisconsin, please visit www.LoopWisconsin.com. For more information or to purchase a gift certificate or season tickets phone the Peninsula Players Box Office at 920-868-3287 or visit the website at www.peninsulaplayers.com.