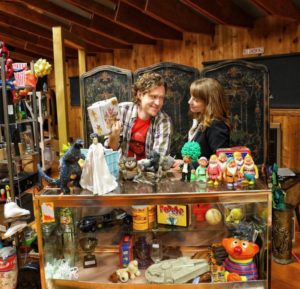 Matt Holzfeind and Melanie Keller in rehearsals at Peninsula Players Theatre for “Salvage,” a new play by Joseph Zettelmaier, performs Tuesdays through Sundays at 7 p.m., except for Sundays, September 9, 23 and October 14 at 3 p.m. A post-show discussion will be held on Saturday, September 8 with the creative team and cast. For information or tickets, phone the Box Office at (920) 868-3287 or visit www.peninsulaplayers.com. Photo by Brian Kelsey.

“Salvage” centers around Jason Byrnes, the proprietor of a Detroit collectibles shop. Every nook and cranny of his dream store, Hidden Treasures, is brimming with vintage monster movie figurines, collectible comic books, autographed photos and classic movie and sports memorabilia. While some people call these items junk, Jason considers them art and it is his dream to be the guardian of these illustrious gems.

“Salvage” is intertwined with drama, comedy, mystery and romance. “I feel like that’s actually a pretty good description of it,” Zettelmaier said in an interview with the Detroit News. “The reason it’s called ‘Salvage’ is because it’s about trying to salvage our lives when the world that we thought we were supposed to be living in turns out that it’s not that world at all.”

Zettelmaier is a four-time nominee for the Steinberg/American Theatre Critics Association Award for best new play and a two-time recipient of the Edgerton Foundation New American Play Award (2009, 2011). His other plays include “All Childish Things,” “Language Lessons,” “It Came from Mars,” “Dead Man’s Shoes” and “The Stillness Between Breaths.” He was profiled in the March 2012 issue of American Theatre Magazine and two of his works were selected to appear in the National New Play Network’s Festival of New Plays. “Salvage” made its world première at First Folio Theatre in Oak Brook, Illinois in 2014.

Zettelmaier is an Artistic Associate and Resident Playwright at First Folio Theatre, an At Large Ambassador to the National New Play Network and an adjunct lecturer at Eastern Michigan University and Schoolcraft College, where he teaches dramatic composition, play production, stage management, stage combat and fundamentals of acting. He also serves as Executive Director for Roustabout Theatre Troupe.

“I tend not to think about specific dramas when I write,” Zettelmaier said, “because I don’t think life really clings to one specific milieu. I’d describe comedy-drama as life. I’d like to think ‘Salvage’ falls into that.”

“Salvage” was first introduced to Door County audiences in 2017 when it was part of the Peninsula Players winter play reading series, The Play’s the Thing. Patrons were enamored with the play and encouraged Artistic Director Greg Vinkler to mount a full stage production.  “Salvage” makes its Wisconsin debut and it is the fourth production of the new play.

“Joe was able to join us for the first week of rehearsals to answer questions and discuss the nuances and threads of the plot and characters with us,” said Vinkler, who is directing “Salvage.” “He was very receptive to our ideas and made a few tweaks and changes to the script that made him very happy.

“Salvage” is set in one of my favorite places to explore,” said Vinkler. “Secluded shops such as Hidden Treasures are caretakers of nostalgia, holding lots of childhood memories and celebrating so many moments from our past. I love wandering through such places and am always surprised by what I find. Lots of junk, of course, but more often than not I come across things that are so lovely and unexpected. I am constantly amazed at the creativity I’ve seen evinced, sitting on a shelf or hanging from the ceiling. Sometimes, though, it’s a bit of a rude awakening, like the time I found the same wooden pirate-themed toy box I had as a child sitting there labeled as an antique!”

Peninsula Players veterans Matt Holzfeind (“Almost, Maine,” “The Actuary,” “Lord Arthur Savile’s Crime,” “Lend Me a Tenor”) and Melanie Keller (“The Fox on the Fairway”) reprise their roles as Jason and Sarah from the 2017 winter play reading series. Keller originated the role of Sarah in First Folio’s world premiere of “Salvage.”

Holzfeind returns to for his fifth season at Peninsula Players where he was first seen in “The Tin Woman.” His Chicago stage credits include About Face’s production of “I Am My Own Wife” and “Oklahoma!” with Paramount Theatre. His regional credits include The Utah Shakespeare Festival, Indiana Repertory Theatre, The New Theatre and Cardinal Stage. Film credits include “Return to the Hiding Place” and “Black Box.”

Keller is the Associate Artistic Director of First Folio where she directed “Mary’s Wedding” and “Silent Sky.” Her performance credits at First Folio include “Private Lives,” “The Importance of Being Earnest,” “The Merchant of Venice,” “Blithe Spirit” and “The Turn of the Screw.” She is a Jeff Award-winner for Best Actress in “The Russian Play” with Signal Ensemble Theatre. Her regional theater credits include Stratford Festival of Canada, The Goodman Theatre, Northlight Theatre, Strawdog Theatre, Lakeside Shakespeare and Michigan Shakespeare. She has appeared on “Chicago Fire,” “Chicago PD” and the short film “UberEx.”

The design team of the collectible-filled shop includes the award-winning creative team of scenic designer J Branson (“Almost, Maine,” “Nunsense,” “Always…Patsy Cline); lighting designer Charles Cooper (“The Bridges of Madison County,” “Dial M for Murder,” “The Mystery of Irma Vep”) and sound designer Christopher Kriz (“Miss Holmes,” “Peter and the Starcatcher,” “The 39 Steps”).  Rounding out the design team are costume designer Kyle R. Pingel (“Almost, Maine,” “Nunsense”) and properties designer Wendy Huber (“The 39 Steps,” “The Actuary”). Pingel and Huber participated in the Peninsula Players internship program and are thrilled to once again return to design at the theatre-in-a-garden.

Peninsula Players is a professional, not-for-profit theater that collaborates with members of Actors’ Equity Association (AEA), the union of professional actors and stage managers; United Scenic Artists (USA), a labor union and professional association of designers, artists and craftspeople and the Stage Directors and Choreographers Society (SDC), a theatrical union of stage directors and choreographers.

“Salvage” performs Tuesdays through Sundays at 7 p.m., except for Sunday, September 9, 23 and October 14 at 3 p.m. A post-show discussion will be held on Saturday, September 8 with the creative team and cast. For information or tickets, phone the Box Office at (920) 868-3287 or visit www.peninsulaplayers.com.