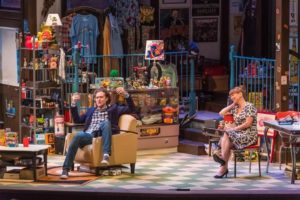 “Salvage” centers around Jason Byrnes, the owner of a Detroit collectibles shop. Every corner and shelf of Hidden Treasures is bursting with collectible comic books, autographed photos, vintage monster movie figurines, vintage board games, T-shirts and sports memorabilia.  Jason’s world is turned topsy-turvy when Sarah, a mysterious young woman, walks in with some very unique items.

Even though Zettelmaier is a fan of many things, he is not a collector. “I’m more someone who grabs stuff that catches my eye at the time,” he said.  Zettelmaier is a Michigan-based, four-time nominee for the Steinberg/American Theatre Critics Association Award for best new play and a two-time recipient of the Edgerton Foundation New American Play Award (2009, 2011).  His first nomination was in 2006 for “All Childish Things,” a comedy about a group of life-long friends and Star Wars enthusiasts who attempt to steal a fortune in collectible merchandise.

Zettelmaier is excited for the post-show discussion and looks forward to hearing comments from patrons. “Feedback is a vital part of the process for me, though in rehearsals, I tend to really try to focus on just getting it from the director,” he said. “But the fun thing with a post-show talkback is the immediacy of it…the audience hasn’t had time to go home and rethink everything. They’re there, responding to what they saw just minutes ago.

“Audience talkbacks have absolutely helped me create a final product. For my play ‘It Came From Mars,’ a piece of audience feedback pointing out a tiny inconsistency in the play helped fuel the next draft. The joke I used to correct that inconsistency ended up becoming one of the biggest laughs in the play.” 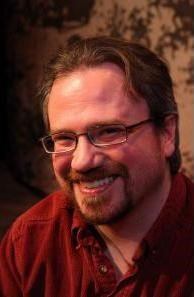 Zettelmaier has produced a range of stage works, a majority of which have unique settings, situations and humor.  “It Came from Mars” features the cast of a 1938 radio show who fly into hysterics when they hear an alarming announcement over the radio – Martians are landing!  His most recent work, “Our Lady of Poison” is based on historical facts from 1659. Set in Rome, the play features a mother-daughter team of poisoners who provide a harsh remedy for spousal abuse. “Our Lady of Poison” made its world première at Williamston Theatre in January of this year.  Zettelmaier also co-authored “Flyover, USA: Voices from Men of the Midwest” at the Williamston Theatre (Winner of the 2009 Thespie Award for Best New Script). He adapted “Christmas Carol” for the Performance Network and was profiled in the March 2012 issue of American Theatre Magazine.  Two of his works were selected to appear in the National New Play Network’s Festival of New Plays.

Peninsula Players veterans Matt Holzfeind (“Almost, Maine,” “The Actuary,” “Lord Arthur Savile’s Crime,” “Lend Me a Tenor”) and Melanie Keller (“The Fox on the Fairway”) reprise their roles as Jason and Sarah from the 2017 winter play reading series. Keller originated the role of Sarah at First Folio where it had its world première in 2014.

“Salvage” was first introduced to Door County audiences in 2017 when it was part of the Peninsula Players winter play reading series, The Play’s the Thing. Patrons were enamored with the play and encouraged Artistic Director Greg Vinkler to mount a full stage production. Vinkler directs this production and enjoys the nostalgia that collectible and antique shops evoke.

Peninsula Players Theatre is committed to providing educational programming for the community. The Players has a long history of educational initiatives including an intern program that dates back to the founding days of the Players in the 1930s. The theater continues to offer theater tours and post-show discussions as listed in the program and website.

Peninsula Players is a professional, not-for-profit theater that collaborates with members of Actors’ Equity Association (AEA), the union of professional actors and stage managers; United Scenic Artists (USA), a labor union and professional association of designers, artists and craftspeople and the Stage Directors and Choreographers Society (SDC), a theatrical union of stage directors and choreographers.