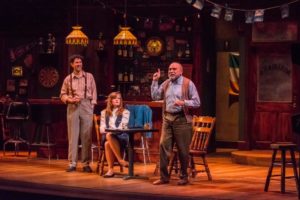 “Now and Then” performs Tuesdays through Saturdays at 8 p.m. and Sundays at 7:30 p.m. except for the closing matinee performance July 1 at 4 p.m.   This touching, funny and fanciful story which centers on Jamie, an aspiring pianist, his girlfriend Abby and a mysterious older gentleman who offers them $1,000 each to talk with him for an hour. Their ensuing conversation changes their lives.

“It is, at the end, very much a love story,” playwright Sean Grennan said. “It kind of asks us what is love worth in our lives? What is it worth going through for love? Are we destined to be with certain people?”

Working as a book writer and lyricist, he collaborated with composer Leah Okimoto on the musicals “Married Alive!,” “A Dog’s Life” and “Another Night Before Christmas,” all of which premièred at Kansas City’s American Heartland Theatre. Two of playwright Grennan’s plays, “Beer for Breakfast” and “As Long as we Both Shall Live” premièred at AHT.

Grennan found a new artistic home at Peninsula Players when his “Making God Laugh” (2011) and “The Tin Woman” (2014), made their world premieres. Both have gone on to have very full lives elsewhere. There have been more than 85 productions of “Making God Laugh” all over the United States, Canada and Latvia. Since it premiered “The Tin Woman” has been produced more than 32 times around the U.S., as well as in England.

“As with the other shows I’ve done there, and all my shows at other places, really, I will be there at all rehearsals and I will be rewriting as we go,” Grennan said. “I do go through some paper and printer ink… I’ve not often created whole new scenes for things, as I usually have the event structure pretty close but I firmly believe in the maxim ‘writing is rewriting.’ Tom Mula (the director) has generously given me some gem ideas to go back to my room and execute. And at a certain point in the process, the actors know the show better than I do and have great suggestions or can at least let me know where it feels wrong. This cast is a bunch of stone-cold killers that I’m thrilled and honored to have, so I’m sure we’ll be doing all of that as we go.”

Peninsula Players veteran actor and director Tom Mula directed both of Grennan’s premières at the Players productions and once again helms the director’s chair for the world première of “Now and Then.” Peninsula Players’ Artistic Director Greg Vinkler is cast as the older gentleman. Vinkler was a member of the Broadway cast of the Tony Award-winning revival of “West Side Story” and has worked with the Royal Shakespeare Company in Stratford-upon-Avon, the Barbican Theatre in London, Vienna’s English Theatre and Singapore Rep.

Mula directed “Chapatti,” “A Real Lulu,” and has performed in 35 Peninsula Players productions including “Opus,” “Heroes,” and “Chicago.”  His Chicago stage credits include Jefferson Awards for his performance in “Hot Mikado” and for his plays “The Golem” and Nicole Hollander’s “Sylvia’s Real Good Advice;” he was Goodman Theatre’s Scrooge for seven seasons. Mula is the author of the bestselling book/award-winning play “Jacob Marley’s Christmas Carol.”

Robertson returns to Peninsula Players and was last seen in “Noises Off” and “The Musical Comedy Murders of 1940.” She has received numerous awards and nominations for her work in such diverse productions as “Wicked” with Shiz Company, “Who‘s Afraid of Virginia Woolf?” at Court Theatre, ”A Little Night Music” and “Mary Stuart” at Chicago Shakespeare Theatre, “The Goat, Or Who is Sylvia,” “Pal Joey” and “Camino Real” at the Goodman Theatre.

“Now and Then” is sponsored by Tony and Judy Licata.

Peninsula Players has been entertaining and exciting audiences since 1935. Prior to performances, patrons picnic and relax on the grounds while watching the setting sun over the waters of Green Bay from the cedar-lined shore and enjoy the ambience of the Beer Garden and other gardens.

The Peninsula Players perform Tuesdays through Saturdays at 8 p.m. and Sundays at 7:30 p.m, except for Sunday July 1, at 4 p.m.  Individual ticket prices range from $39 to $45. There are no performances on Mondays. For more information or to reserve tickets phone the Peninsula Players Box Office at 920-868-3287 or visit the website www.peninsulaplayers.com.