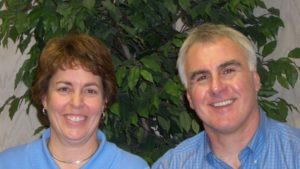 The Sister Bay Advancement Association has awarded the 2018 Sister Bay Volunteer of the Year award to Sally and Jeff Pfeifer. Sally and Jeff have been residents of Sister Bay for over 30 years, and have two daughters, Mollie and Allison. They are looking forward to being grandparents for the first time early next year.

Sally helped to establish the Northern Door branch of the YMCA, serving as its first director, and continues to be active as an instructor and YMCA Board member. Sally also worked as an insurance agent at the Thomas/Pfeifer Insurance Agency. She currently serves on the Board of the Door County Medical Center, Sister Bay Moravian Church, and is a past member of the Gibraltar School Board. Sally is always a willing and enthusiastic volunteer for many of the SBAA sponsored festivals and events.

Jeff was the owner of the Thomas/Pfeifer Insurance Agency in Sister Bay for many years and continues to work as an agent for the David/Pfeifer Agency. Jeff volunteers as the Treasurer for the Sister Bay Bays baseball team and is a former shortstop for the team. Jeff also volunteers his time as a Peninsula State Park Ski Trail Groomer. Jeff has served on the Sister Bay Village Planning Committee as well as the Gibraltar Schools Facility Committee and Booster Club. Jeff is always willing and able to help the SBAA with many of our annual events.

To honor their service to the Sister Bay community, Sally and Jeff will ride as the Parade Marshalls in the 73rd Annual Fall Festival Parade at 11:00 on Saturday, October 13. In addition, the SBAA will make a contribution in their name to the charity of their choice.

Thank you to all our volunteers, especially Jeff and Sally! Your help and dedication make our community is a better place to live.