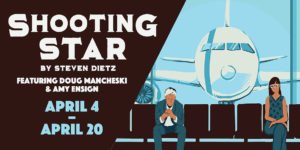 Third Avenue Playhouse opens the 2019 season with Shooting Star, written by American playwright Steven Dietz. The play has a simple plot: two college lovers, Elena Carson (Amy Ensign) and Reed McAllister (Doug Mancheski), are unexpectedly reunited when they’re snowed in at an airport. Elena has stayed true to her hippie-ish, counter-culture path, while Reed has gone predictably corporate and conservative. As the night gives way to laughter, banter, remembrance and alcohol, Elena and Reed revisit a past that holds more surprises than they imagined—and a present that neither of them could have predicted.

Opening night of Shooting Star benefits the Door Peninsula Astronomical Society. Performance schedule begins April 4 and goes through April 20, Thursday – Saturday evenings at 7:30pm and Sunday matinees at 2:00pm. There is also a special Wednesday performance on April 17 at 7:30pm. General Admission is $30 for adults and $12 for students. There is also a pay-what-you-can preview on April 3.

Third Avenue Playhouse is Door County’s only year-round professional theatre. Founded in 2000, TAP’s mission is to entertain and educate by provoking thought, laughter, and tears. Facilities include the 250-seat mainstage as well as the 84-seat Studio Theatre. Led by Co-Artistic Directors Bob Boles and James Valcq, TAP produces riveting performances of contemporary and classic plays, musicals, and even opera, bringing audiences face to face with powerful stories by creating the most intimate theatrical experience possible.