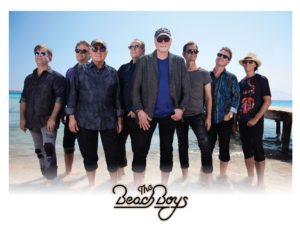 On Saturday, June 9, at 8 p.m., pop music legends The Beach Boys will open the 2018 season at Door Community Auditorium (DCA) in Fish Creek. The show is sold out.

The Baltimore Sun writes, “The Beach Boys sound better onstage now than they did in their 1960s and 1970s golden age…bright, sun-kissed, booming.”

The Beach Boys permanently altered the American musical landscape when they burst on the scene in 1961 with “Surfin’,” capturing the ear of the nation with their lush, sun-soaked harmonies. Their legendary album “Pet Sounds” (1966) married popular appeal with critical acclaim in a way few bands have done before or since.

Now captained by founding member Mike Love, The Beach Boys play over 150 dates a year, bringing the “fun fun fun” of “Good Vibrations,” “Kokomo” “Wouldn’t It Be Nice,” and “California Girls” to fans around the world.

“It’s pretty miraculous that we can start out as a bunch of guys who didn’t know anything about fame or money, or anything like that,” says Love. “All we knew was we liked to sing and make harmonies together. So to have it become part of American musical culture is pretty amazing.”