You are here: Home / Door County Newswire / “The Bridges of Madison County” Comes to Peninsula Players 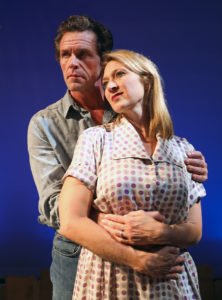 FISH CREEK, WI, July 26, 2017 — Audiences are likely to be swept away by the life-changing, four-day love affair in the lush musical “The Bridges of Madison County” at Peninsula Players Theatre July 26 through August 13, 2017. One of the most romantic stories ever written, “The Bridges of Madison County” first captured the nation’s attention in 1992 as a best-selling novel, then again in 1995 as a major motion picture. It is now an irresistible, two-time Tony Award-winning musical.

Developed by the Pulitzer- and Tony Award-winning creative team of Jason Robert Brown (“Parade,” “The Last Five Years”) and Marsha Norman (“The Secret Garden,” “The Color Purple”), the Daily News called “The Bridges of Madison County” “one of Broadway’s best scores in the last decade.”

Francesca, an Italian war bride, looks forward to a rare four days alone on her Iowa farm. While her family heads to the 1965 Indiana State Fair, the world-weary photographer Robert pulls into her driveway seeking directions. What unfolds is an unforgettable story of two people caught between decision and desire as their chance encounter becomes a second chance at so much more. What happens in those next four days may very will alter the course of Francesca’s life.

“The story is so romantic – and gives us pause to wonder, ‘what-if?’” said director Elizabeth Margolius. “It leaves us asking some tough questions about what is most important in life – and does so with a glorious score! I have long loved this story – it is truly one we can all relate too – and Jason Robert Brown’s soaring, beautiful score is one of my favorites. Gorgeous music, a universal love story, a perfect setting – who could ask for anything more?!”

Based on the captivating novel by Robert James Waller, the soulful score mixes pop, folk, country and classic music. Brown’s score received the Outer Critics Circle Award for Outstanding New Score, the Drama Desk Awards for Outstanding Music and Outstanding Orchestrations and the Tony Awards for Best Original Score and Best Orchestrations. This “What if…?” romance will light-up the Theatre-in-a-Garden with song from July 26 through August 13.

“The Bridges of Madison County” features a cast of 10 including Steve Koehler(“The Hollow,” “The Full Monty”) as Robert, the ruggedly handsome photographer and newcomer Cory Goodrich as Francesca, a funny and generous Iowa farm wife. “Steve and Cory’s beautiful and soulful voices are the perfect blend for this eclectic score and powerful love story,” Margolius said.

Along with the cast, seven musicians complete the artistic performing company and reunites a majority of the The Bodacious Bobcats, the band from the Peninsula Players’ production of “Always…Patsy Cline.” Former members include Bruce Newbern on percussion (“Nunsense,” “Peter and the Starcatcher”); Lynn Gudmundsen on fiddle, violin, mandolin and guitar; Craig McClelland (“The Full Monty”) on bass and George Sawyn on guitars. Joining them in the orchestra for “The Bridges of Madison County” are Kim Souther (“The Full Monty,” “Nunsense”)on cello and Janet Anderson, who makes her Players debut on keyboards.

“The Bridges of Madison County” is sponsored by Alibi Marina, Harbor Guest House and The Cordon Family Foundation.

“The Bridges of Madison County” performs Tuesdays through Saturdays at 8 p.m. and Sundays at 7:30 p.m. July 26 through August 12. The closing performance on August 13 is a matinee performance scheduled for 4 p.m. Discount tickets are available for groups of 15 or more. Individual ticket prices range from $41 to $47. For more information or to reserve tickets phone the Peninsula Players Box Office at 920-868-3287 or visit the website at www.peninsulaplayers.com.