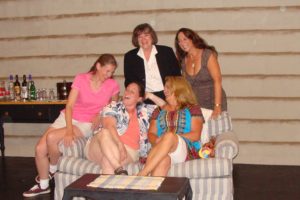 Rogue Theater heats up summer with the amazing script, The Dixie Swim Club, by Nicholas Hope, Jessie Jones, and Jamie Wooten.  Sponsored by the Women’s Fund of Door County, this all-female cast celebrates the best of women’s relationships.  Enduring friendships are among the most important aspects of human existence. They sustain us when all else fails — marriages, children, careers, investments.

The Dixie Swim Club is a play about the importance of women’s friendships, illustrated by 5 southern women, in four scenes, covering 33 years of their lives. These women, whose friendships began many years ago on their college swim team, set aside a long weekend every August to recharge those relationships. Free from husbands, kids and jobs, they meet at the same beach cottage on North Carolina’s Outer Banks to catch up, laugh and meddle in each other’s lives. The play focuses on four of those weekends.

Sheree, the spunky team captain, desperately tries to maintain her organized and “perfect” life, and continues to be the group’s leader. Dinah, the wisecracking overachiever, is a career dynamo. But her victories in the courtroom are in stark contrast to the frustrations of her personal life. Lexie, pampered and outspoken, is determined to hold on to her looks and youth as long as possible. She enjoys being married—over and over and over again. The self-deprecating and acerbic Vernadette, acutely aware of the dark cloud that hovers over her life, has decided to just give in and embrace the chaos. And sweet, eager-to-please Jeri Neal experiences a late entry into motherhood that takes them all by surprise.

As their lives unfold and the years pass, these women increasingly rely on one another, through advice and raucous repartee, to get through the challenges (men, sex, marriage, parenting, divorce, aging) that life flings at them. And when fate throws a wrench into one of their lives in the second act, these friends, proving the enduring power of “teamwork,” rally ’round their own with the strength and love that takes this comedy in a poignant and surprising direction. The Dixie Swim Club is the story of these five unforgettable women—a hilarious and touching comedy about friendships that last forever…

This unforgettable cast includes Jen Birkholz as Sheree, Lola DeVillers as Lexi, Donna Johnson as Dinah, Jamie Buesing as Vernadette and Debbie Finn as Jeri Neal. Together they are directed by Stuart Champeau and will perform August 9-24. Shows are Thursday, Friday and Saturday at 7:30 and Sunday 2:00, at Rogue Theater, 340 Jaycee Ct. Sturgeon Bay.  Tickets are $15 for adults and $10 for students.  For further information and ticket reservations, contact Rogue Theater at 920-818-0816 or checkout their Facebook page at www.facebook.com/roguetheater/.