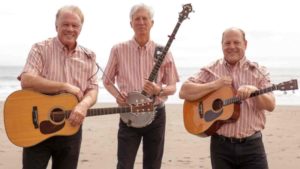 On Sunday, October 14, at 7 p.m., folk legends The Kingston Trio will take the stage at Door Community Auditorium (DCA) in Fish Creek.

The recipients of the 2011 Lifetime Achievement Grammy Award, The Kingston Trio became one of the most prominent faces of the mid-century folk boom with the release of their hit single “Tom Dooley” (which sold over three million copies) as well as songs like “Greenback Dollar,” “Scotch and Soda,” and “The M.T.A. Song.”

American Songwriter wrote that The Kingston Trio “[reminds] us of what we thought we were once upon a time and maybe, what we should aspire to be again.”